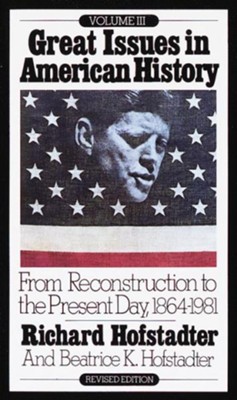 ▼▲
The third volume in Great Issues In American History, From Reconstruction to the Present Day is now updated and revised to include another decade of American history. Beatrice K. Hofstadter, wife of the late Richard Hofstadter and herself an historian who worked with him closely on the original edition, has added a new section covering 1970 to 1981 and rearranged other sections in the light of what has since proved to be of lasting importance. This collection of significant documents in American history now goes from Lincoln's Proclamation on the Wade-Davis Bill on July 8, 1864, to Reagan's Address on Arms Control Negotiations on November 18, 1981.

From Settlement to Revolution. 1584-1776 Edited by Clarence L. Ver Steeg and Richard Hofstadter

▼▲
Richard Hofstadter (1916–1970) was one of the leading American historians and intellectuals of the twentieth century. Throughout his career, he worked at many universities, most recently as the DeWitt Clinton Professor of History at Columbia University. His works include the Pulitzer Prize–winning The Age of Reform and Anti-intellectualism in American Life.

▼▲
I'm the author/artist and I want to review Great Issues in American History, Vol. III: From Reconstruction to the Present Day, 1864-1981 - eBook.
Back
Back