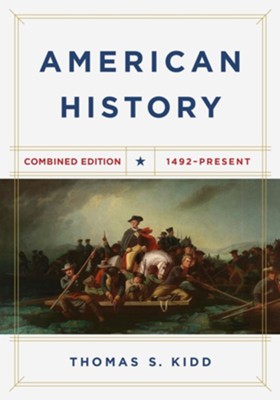 Thomas S. Kidd's American History Combined Edition: 1492-Present covers American history from first Native American societies through the Civil War to the current day's political and cultural struggles. This engaging survey features fascinating stories of both the everyday people who struggled to make their way in a new country as well as well-known presidents, generals, and statesmen. Written with an eye towards the role of religion and faith in America, this engaging overview discusses the role Christianity played for good and for ill and weaves together topics such as slavery, military conflicts, the Civil Rights movement, the culture wars of the past half-century, the American focus on entertainment, the rise of social media, and more. Students will come away from this single-volume tome having read a compelling narrative of the defeats and triumphs that have defined the American national experience. AP / College Freshman level. 691 pages, softcover, indexed.