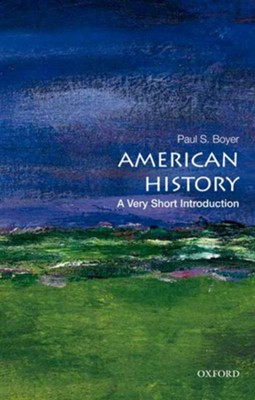 ▼▲
In a miracle of concision, Paul S. Boyer provides a wide-ranging and authoritative history of America, capturing in a compact space the full story of our nation. Ranging from the earliest Native American settlers to the presidency of Barack Obama, this Very Short Introduction offers an
illuminating account of politics, diplomacy, and war as well as the full spectrum of social, cultural, and scientific developments that shaped our country.

Here is a masterful picture of America's achievements and failures, large-scale socio-historical forces, and pivotal events. Boyer sheds light on the colonial era, the Revolution and the birth of the new nation; slavery and the Civil War; Reconstruction and the Gilded Age; the Progressive era, the
Roaring Twenties and the Great Depression; the two world wars and the Cold War that followed; right up to the tragedy of 9/11, the wars in Iraq and Afghanistan, and the epoch-making election of Barack Obama. Certain broad trends shape much of the narrative--immigration, urbanization, slavery,
continental expansion, the global projection of U.S. power, the centrality of religion, the progression from an agrarian to an industrial to a post-industrial economic order. Yet in underscoring such large themes, Boyer also highlights the diversity of the American experience, the importance of
individual actors, and the crucial role of race, ethnicity, gender, and social class in shaping the contours of specific groups within the nation's larger tapestry. And along the way, he touches upon the cultural milestones of American history, from Tom Paine's The Crisis to Allen Ginsberg's Howl.

American History: A Very Short Introduction is a panoramic history of the United States, one that covers virtually every topic of importance--and yet can be read in a single day.

▼▲
Paul S. Boyer was Merle Curti Professor of History Emeritus at the University of Wisconsin-Madison. A leading authority on American history, his writings span the social origins of the Salem witchcraft outbreak to the cultural impact of the atomic bomb and the political implications of Bible
prophecy belief in contemporary America. A history textbook author and editor of reference works, including The Oxford Companion to United States History, he published in many general-interest periodicals. He also appeared on PBS, BBC, the History Channel, and the Discovery Channel, and lectured at
some 100 colleges and universities in the United States, Germany, Great Britain, Ireland, Scandinavia, and Switzerland.

▼▲
"Paul Boyer, a scholar's scholar and a teacher's teacher, has here encompassed the entirety of American history in an account that testifies on every page to his lifetime of deep and thoughtful learning, and to his remarkable powers of synthesis, concision, balance, and trenchantly lucid
writing."--David M. Kennedy, author of Freedom From Fear: The American People in Depression and War, 1929-1945

▼▲
I'm the author/artist and I want to review American History: A Very Short Introduction.
Back