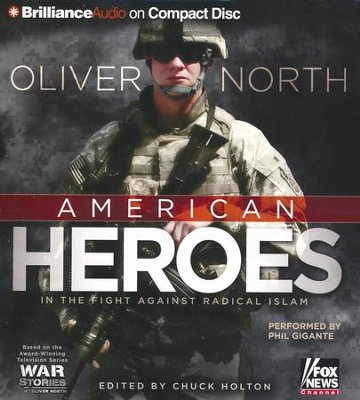 Narrated By: Phil Gigante
Edited By: Chuck Holton
By: Oliver North
Brilliance Audio / 2015 / Compact disc
Write a Review
Expected to ship on or about 06/19/20.
Email me when this product is available.
Stock No: WW363358

▼▲
An extraordinary firsthand account of the brave Americans who're defending us against radical Islamic terrorists! Drawing on his experience as a decorated military officer, television correspondent North offers an up-close portrait of the U.S. soldiers, sailors, airmen, Guardsmen, and Marines who volunteer to head into harm's way to protect us.

In American Heroes, New York Times bestselling author Oliver North offers an inspiring, first-hand account of the extraordinary young American volunteers defending us against radical Islamic terror. Since 9-11-01, North and his award-winning War Stories documentary team have made a dozen extended trips to Afghanistan, Iraq and the Philippines covering U.S. soldiers, sailors, airmen, Guardsmen and Marines for FOX News Channel. With extensive experience as a decorated military officer, a counter-terrorism expert and as a documentary filmmaker embedded with American combat units, he has a unique perspective on the enemy we face and the qualities of those who protect us.

American Heroes offers a close-up of this generation’s “citizen-soldiers” who have chosen the path of the patriot and gone into harm’s way for their countrymen. North’s unprecedented access, his grasp of history and his lucid reports from the crucible of combat make this a stirring chronicle of courage, commitment, compassion and faith.

“Real heroes are selfless. Those who serve America in harm’s way in the war against radical Islam have that quality in abundance. And so do their families and loved ones at home. Yet, they rarely get the attention or coverage they deserve. Despite the way they are too often presented, the men and women in uniform today are overwhelmingly good. I never cease to be amazed at the self-discipline of these brave young Americans. They can endure the adrenaline-pumping violence of an enemy engagement—and then, just minutes later, help children get safely to school. No nation—ours included—has ever had a military force better than the one we have today.” —Oliver North

▼▲
Oliver North is a combat-decorated Marine, the recipient of the Silver Star, the Bronze Star for valor, and two Purple Hearts for wounds in action. From 1983 to 1986 he served as the U.S. government’s counter-terrorism coordinator on the National Security Council staff. President Ronald Reagan described him as “an American hero.” A New York Times best-selling author, syndicated columnist, and host of the award-winning War Stories documentary series on the FOX News Channel, North lives with his wife, Betsy, in Virginia. They have four children and eleven grandchildren.

▼▲
I'm the author/artist and I want to review American Heroes, Abridged audio CD.
Back
×
Back
×