We are OPEN and SHIPPING - click here for shipping estimates
PRE-SUMMER CYBER SALE: Shop over 2,500 items up to 90% off through 5/26 >
American Guerrilla
By: Mike Guardia 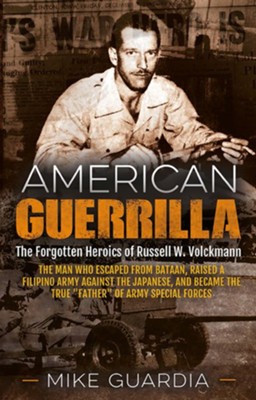 With his parting words, "I shall return," General Douglas MacArthur sealed the fate of the last American forces on Bataan. Yet one young Army Captain named Russell Volckmann refused to surrender. He disappeared into the jungles of north Luzon where he raised a Filipino army of more than 22,000 men. For the next three years he led a guerrilla war against the Japanese, killing more than 50,000 enemy soldiers. At the same time he established radio contact with MacArthur’s headquarters in Australia and directed Allied forces to key enemy positions. When General Yamashita finally surrendered, he made his initial overtures not to MacArthur, but to Volckmann.

This book establishes how Volckmann’s leadership was critical to the outcome of the war in the Philippines. His ability to synthesize the realities and potential of guerrilla warfare led to a campaign that rendered Yamashita’s forces incapable of repelling the Allied invasion. Had it not been for Volckmann, the Americans would have gone in "blind" during their counter-invasion, reducing their efforts to a trial-and-error campaign that would undoubtedly have cost more lives, materiel, and potentially stalled the pace of the entire Pacific War.

Second, this book establishes Volckmann as the progenitor of modern counterinsurgency doctrine and the true "Father" of Army Special Forces—a title that history has erroneously awarded to Colonel Aaron Bank of the European Theater of Operations. In 1950, Volckmann wrote two army field manuals: Operations Against Guerrilla Forces and Organization and Conduct of Guerrilla Warfare, though today few realize he was their author. Together, they became the US Army’s first handbooks outlining the precepts for both special warfare and counter-guerrilla operations. Taking his argument directly to the army chief of staff, Volckmann outlined the concept for Army Special Forces. At a time when US military doctrine was conventional in outlook, he marketed the ideas of guerrilla warfare as a critical force multiplier for any future conflict, ultimately securing the establishment of the Army’s first special operations unit—the 10th Special Forces Group.

Volckmann himself remains a shadowy figure in modern military history, his name absent from every major biography on MacArthur, and in much of the Army Special Forces literature. Yet as modest, even secretive, as Volckmann was during his career, it is difficult to imagine a man whose heroic initiative had more impact on World War II. This long overdue book not only chronicles the dramatic military exploits of Russell Volckmann, but analyzes how his leadership paved the way for modern special warfare doctrine.

Mike Guardia, currently an officer in the US 1st Armored Division is also author of Shadow Commander, about the career of Donald Blackburn, and an upcoming biography of Hal Moore.

▼▲
Mike Guardia is an internationally recognized author and military historian. A veteran of the US Army, he served six years on active duty as an armor officer. He is the author of the widely acclaimed Hal Moore: A Soldier Once . . . And Always, the first-ever biography chronicling the life of Lieutenant General Harold G. Moore, whose battlefield leadership was popularized by the film We Were Soldiers, starring Mel Gibson. Guardia has been nominated twice for the Army Historical Foundation's Distinguished Writing Award and is an active member in the Military Writers Society of America.

As a speaker, Guardia hosts the lecture series "Hal Moore: Lessons in Leadership," which is available for presentation at schools, businesses, and civic organizations worldwide. He has given presentations at the US Special Operations Command and the International Spy Museum. His work has been reviewed in the Washington Times, Armchair General, ARMY magazine, defenceWeb, and Miniature Wargames UK.

Guardia holds a bachelor of arts and master of arts in American history from the University of Houston. He currently lives in Texas.

▼▲
I'm the author/artist and I want to review American Guerrilla.
Back
×
Back
×