Skip to main content
American Grace: How Religion Divides and Unites Us
By: Robert Putnam, David Campbell
Stock No: WW566731 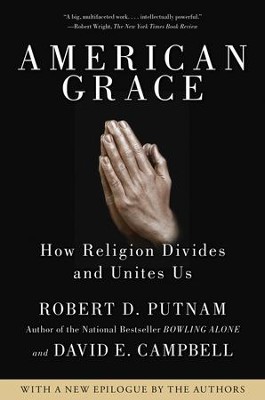 American Grace: How Religion Divides and Unites Us

▼▲
"Based on two of the largest and most comprehensive surveys ever conducted. An instant classic, which is as academically authoritative as it is brilliantly entertaining. And for those who pray that religion can do more to unite than divide over 300 million Americans, it is both a blueprint and a blessing,"---America. 673 pages, softcover.

▼▲
American Grace is “perhaps the most sweeping look yet at contemporary American religion. It lays out the broad trends of the past fifty years, assesses their sociological causes, and then does a bit of fortune-telling” (The Washington Post).

Unique among nations, America is deeply religious, religiously diverse, and remarkably tolerant. In recent decades, however, the nation’s religious landscape has undergone several seismic shocks. American Grace is an authoritative, fascinating examination of what precipitated these changes and the role that religion plays in contemporary American society.

Although there is growing polarization between religious conservatives and secular liberals today, at the same time personal interfaith ties are strengthening. Interfaith marriage has increased, and religious identities have become more fluid. More people than ever are friendly with someone of a different faith or no faith at all. Putnam and Campbell show how this denser web of personal ties brings greater interfaith tolerance, despite the so-called culture wars.

Based on two of the most comprehensive surveys ever conducted on religion and public life in America (and with a new epilogue based on a third survey), American Grace is an indispensable book about American religious life, essential for understanding our nation today.

▼▲
Robert D. Putnam is the Peter and Isabel Malkin Professor of Public Policy at Harvard University and founder of the Saguaro Seminar: Civic Engagement in America. He is the author or coauthor of ten previous books.
David E. Campbell is the John Cardinal O’Hara, C.S.C. Associate Professor of Political Science at the University of Notre Dame as well as the director of the Rooney Center for the Study of American Democracy.

▼▲
“[A] finely-grained and judicious study, sure to become a classic work of social analysis. . . . Riveting and sometimes disconcerting insights into the ways religion shapes and is shaped by the political and social currents of American life.”
—Foreign Affairs

▼▲
I'm the author/artist and I want to review American Grace: How Religion Divides and Unites Us.
Back