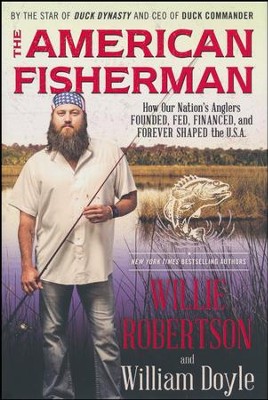 An essential book for everyone who loves casting a line into our nation's waters, The American Fisherman, by outdoorsman Willie Robertson (CEO of Duck Commander and star of A&E’s Duck Dynasty) and historian William Doyle, reveals that in the U.S.A., fishing is far more than a pastime—it has shaped our past and defined our character in remarkable ways.

This generously illustrated celebration of fish, anglers, and our country’s treasured wild places traces fishing’s astonishing impact on the United States and its people, from its settlement and founding, to powering its economy and inspiring our creativity and faith. Blessed by perhaps the most diverse and abundant waters in the world, Native Americans were the continent’s first master anglers and incorporated fish into their spiritual beliefs and legends. When the Vikings, the earliest European visitors, arrived, they were drawn across the Atlantic Ocean by the bountiful fishing grounds of North America’s East Coast. During the colonial era, fish helped save the Pilgrims, make George Washington wealthy, and win the American Revolution. From New England cod to Pacific Northwest salmon to Gulf shrimp, the fishing industry has fed and financed centuries of Americans in every region of the country.

Throughout, Willie and Bill explore how fishing has made an enduring mark on our national identity and culture. The American Fisherman is also an ode to our nation’s extraordinary natural places: alpine trout streams in the Rocky Mountains, steelhead runs along the storm-tossed Alaskan coast, the azure waters off Key West where marlin roam, and the bayous of Louisiana where the Robertsons have instilled the love and lessons of fishing down through the generations, as so many other families have.

A spirited and unique look at the U.S.A. and its people, The American Fisherman will hook every sportsman from the first page and forever deepen their appreciation for the fishing life.

Willie Robertson is the CEO of Duck Commander, Buck Commander, Fin Commander, and Strut Commander. The author of the New York Times bestseller The Duck Commander Family, Willie is a cast member and executive producer of A&E’s hit show Duck Dynasty. He lives with his wife and business partner, Korie, and their children, John Luke, Sadie, Will, Bella, and Rebecca, in West Monroe, Louisiana.

William Doyle has written or cowritten seven books, including PT 109: An American Epic of War, Survival, and the Destiny of John F. Kennedy and American Gun: A History of the U.S. in Ten Firearms (with “American Sniper” Chris Kyle). He served as director of original programming for HBO and was coproducer of the PBS special Navy SEALs: Their Untold Story. He lives with his family in New York City.

▼▲
“A celebration of sport fishing in America, its history, locales and impact, by the outdoorsman who is the star of the television show, Duck Dynasty.”
“The perfect gift for the fishing enthusiast in your family.”
“It’s fascinating! ... [Tells] how fishing is an integral part of America.”
“Your outdoorsman is going to leap when he unwraps The American Fisherman.”

▼▲
I'm the author/artist and I want to review American Fisherman.
Back
×
Back
×