Skip to main content
SPRING CYBER EVENT STARTS NOW: And it's a really BIG deal! Up to 88% off through 5/24>
Home to Stay: One American Family's Chronicle of Miracles and Struggles in Contemporary Israel - eBook
By: Daniel Gordis
Stock No: WW12712EB 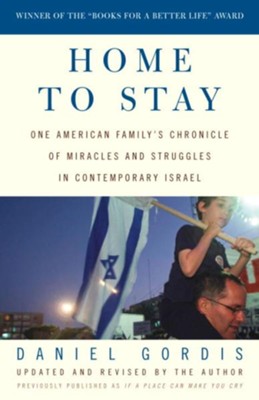 Home to Stay: One American Family's Chronicle of Miracles and Struggles in Contemporary Israel - eBook

▼▲
In the summer of 1998, Daniel Gordis and his family moved to Israel from Los Angeles. They planned to be there for a year, but a few months into their stay, Gordis and his wife decided to remain in Jerusalem permanently, confident that their children would be among the first generation of Israelis to grow up in peace.

Immediately after arriving in Israel, Daniel had started sending out e-mails about his life to friends and family abroad. These missives—passionate, thoughtful, beautifully written, and informative—began reaching a much broader readership than he’d ever envisioned, eventually being excerpted in The New York Times Magazine to much acclaim. An edited and finely crafted collection of his original e-mails, Home to Stay is a first-person, immediate account of Israel’s post-Oslo meltdown that cuts through the rhetoric and stridency of most dispatches from that country or from the international media. This is must reading for anyone who wants to get a firsthand, personal view of what it’s like for a family on the front lines of war.

▼▲
I'm the author/artist and I want to review Home to Stay: One American Family's Chronicle of Miracles and Struggles in Contemporary Israel - eBook.
Back
Back