Skip to main content
SPRING CYBER EVENT STARTS NOW: And it's a really BIG deal! Up to 88% off through 5/24>
American Exceptionalism and Civil Religion: Reassessing the History of an Idea - eBook
By: John D. Wilsey, John Fea
Stock No: WW81197EB 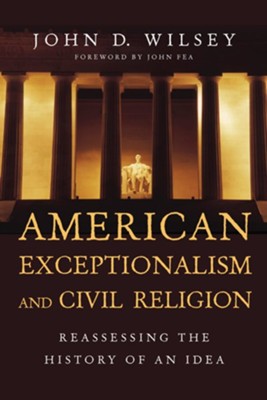 American Exceptionalism and Civil Religion: Reassessing the History of an Idea - eBook

▼▲
Ever since John Winthrop told his fellow colonists in 1630 that they were about to establish a City upon a Hill, the idea of having a special place in history has captured the American imagination. Through centuries of crises and opportunities, many have taken up this theme to inspire the nation. But others have criticized the notion because it implies a sense of superiority which can fuel racism, warmongering and even idolatry.

In this remarkable book, John Wilsey traces the historical development of exceptionalism, including its theological meaning and implications for civil religion. From seventeenth-century Puritans to twentieth-century industrialists, from politicians to educators, exceptionalism does not appear as a monolithic concept to be either totally rejected or devotedly embraced. While it can lead to abuses, it can also point to constructive civil engagement and human flourishing. American Exceptionalism and Civil Religion considers historically and theologically what makes the difference.

Neither the term nor the idea of American exceptionalism is going away. John Wilsey's careful history and analysis will therefore prove an important touchstone for discussions of American identity in the decades to come.

▼▲
Ever since John Winthrop told his fellow colonists in 1630 that they were about to establish a City upon a Hill, the idea of having a special place in history has captured the American imagination. Through centuries of crises and opportunities, many have taken up this theme to inspire the nation. But others have criticized the notion because it implies a sense of superiority which can fuel racism, warmongering and even idolatry. In this remarkable book, John Wilsey traces the historical development of exceptionalism, including its theological meaning and implications for civil religion. From seventeenth-century Puritans to twentieth-century industrialists, from politicians to educators, exceptionalism does not appear as a monolithic concept to be either totally rejected or devotedly embraced. While it can lead to abuses, it can also point to constructive civil engagement and human flourishing. This book considers historically and theologically what makes the difference. Neither the term nor the idea of American exceptionalism is going away. John Wilsey?s careful history and analysis will therefore prove an important touchstone for discussions of American identity in the decades to come.

▼▲
John Wilsey takes the concept of American exceptionalism - a cultural lightning rod if ever there was one - and helps us to think deeply about it. Both historian and theologian, Wilsey's larger goal is to help American Christians think historically and Christianly about our national identity. Rather than pushing us either to embrace or reject the view of America as exceptional, he argues persuasively that there are expressions of exceptionalism that the Christian can affirm, as well as aspects that the faithful believer must renounce. His book helps us to discern between the two. Any thinking Christian who aspires to patriotism without idolatry would benefit from reading this fine work.
-Robert Tracy McKenzie,
professor and chair, department of history, Wheaton College

Distinguished by rich historical details and astute theoretical insights, John Wilsey liberates academic discussions of American exceptionalism and civil religion from their ivory-tower confines and presents them anew to a broad audience. Positioning himself as both an unapologetic American citizen and Christian, Wilsey skillfully describes, defines and critiques these interlocking categories. This book will be of great interest not only to scholars, but also to all people of good will who cherish American diversity alongside the worthy pursuit of establishing a broad and inclusive consensus.
-Arthur Remillard,
associate professor of religious studies, St. Francis University

This unsparing recitation of manifest destiny, Indian removal, slavery, Cold War dualism and pervasive jingoism should give all American Christians pause. John Wilsey, in offering an alternative model for Christian engagement with the state, moves the conversation toward a higher ideal of global and kingdom citizenship.
-David Swartz,
assistant professor of history, Asbury Theological Seminary, author of Moral Minority

Nations are what we make them. Inherently, they are neither godly, nor wicked. Most are both. John D. Wilsey demonstrates this and much more. Deeply thought and engagingly written, this book delves into religious claims about American exceptionalism with passion and compassion. Through the twists and turns, Wilsey offers entirely new ways to be faithfully Christian while participating in the life of the nation.
-Edward J. Blum,
professor of history, San Diego State University

In an age that appears as confused as ever about the connections between the kingdom of Christ and American identity, American Exceptionalism and Civil Religion is vital reading. John Wilsey has charted the complex course of a historical idea, American exceptionalism, in a way that is fair and nuanced, yet honest and timely. Combining far-reaching interaction with the most current scholarship and careful theological reflection, Wilsey tells this story in a way that will be accessible to a broad audience. I am delighted to recommend it widely and enthusiastically!
-Matthew J. Hall,
vice president for academic services, The Southern Baptist Theological Seminary

Wilsey provides the most up-to-date history of the concept of American exceptionalism available and shows an astute understanding of its relationship to civil religion. He argues for the adaptation of a pluralistic exceptionalism based on the nation's continuing struggle for and commitment to equality, freedom and justice, rejecting the frequently invoked model that frames America as an innocent nation chosen and commissioned by God.
-Anne M. Blankenship,
assistant professor, department of history, philosophy and religious studies, North Dakota State University

John Wilsey has delivered a provocative and much-needed account of the promise and perils of American exceptionalism. Few other writers possess the combination of historical and theological insight required to produce a book of this kind.
-Thomas S. Kidd,
professor of history, Baylor University

▼▲
John D. Wilsey (PhD, Southeastern Baptist Theological Seminary) is assistant professor of history and Christian apologetics at Southwestern Baptist Theological Seminary. He also serves as associate director and senior research fellow for faith and liberty at the Land Center for Cultural Engagement at Southwestern. He is the author of One Nation Under God: An Evangelical Critique of Christian America.

▼▲
"In his recently released work, American Exceptionalism and Civil Religion, John Wilsey offers a genealogy of thought about god and nation. . . . There is much great food for thought in Wilsey's volume." -- Mark Edwards, Religion in American History, November 23, 2015

"This is a must-read if you are a Christian who is trying to make sense of the relationship between your faith and American identity. But Wilsey's book will also be useful for anyone—Christian or not—who is interested in the history of the idea of American exceptionalism." -- John Fea, The Way of Improvement Leads Home, January 12, 2016

"We're fortunate to have John D. Wilsey, author of an excellent new study called American Exceptionalism and Civil Religion: Reassessing the History of an Idea. . . . I come away from American Exceptionalism and Civil Religion emboldened, yet also humbled. I can embrace aspects of the 'open exceptionalism' that are deeply rooted in our national history—especially our dedication to the civil rights spelled out in our founding documents, however inconsistent that dedication has been over the years. But Americans, including too many Christians, still fail to wrestle with the dark aftereffects of having pursued, much too often, a 'closed' vision of exceptionalism. Wilsey's book is a helpful reminder of America's complicated historical legacy, of how we inherit a past at once brilliant, boisterous, inspiring, and highly destructive. . . . Campaign seasons have a way of exposing national fault lines. They reveal how we're still trying to figure out what this thing called America is all about—and just how 'exceptional' it really is, or has been, or should be in the future. Wilsey's book is a terrific resource for readers seeking clarity, theological perspective, and historical context as they participate in that grand American tradition of defining—and debating—who we are." -- Harold K. Bush, Christianity Today, January 28, 2016

"This book will be helpful to lay people and scholars, pastors and teachers, students and others who desire to be good Christian citizens of America. The problems and concerns are real, particularly for those who are troubled by the blurring of patriotism and nationalism with Christianity. . . . 'Does it not seem strange and contradictory that we who affirm the sole supremacy of Christ exult over American glory at the same time and place that we gather to confess that "Jesus is Lord?"' (p. 215). That is a good questions, indeed, and one that the readers of Wilsey's book will be better equipped to understand and answer." -- Glenn R. Kreider, Bibliotheca Sacra, January-March 2017

" American Exceptionalism is a genuinely excellent book. I strongly encourage pastors and teachers of every kind to read it for the sake of the cancer he does treat. You need his historical analysis." -- Providencemag.com, August 24, 2017

"(Wilsey's) latest book, American Exceptionalism and Civil Religion: Reassessing the History of an Idea, is in many ways a tract for the times. It's historically perceptive, theologically responsible, and hits on a topic that matters to ordinary believers. . . . America is exceptional in many ways, and there is nothing wrong with affirming this conviction. But idolatrous forms of exceptionalism should be rejected as false gospels, even (especially?) when they arise in evangelical contexts otherwise committed to the full authority of the Scripture and transforming power of the good news of Jesus Christ." -- Nathan A. Finn, The Gospel Coalition, November 16, 2015

"Wilsey should be commended for challenging the hubristic exceptionalism of his intended evangelical audiences while identifying constructive elements for a new patriotism. Certainly, all undergraduate readers will appreciate thinking along with Wilsey about the virtues as well as the vices of nationalism." -- Mark Edwards, Journal of Church and State, Summer 2016

"The idea that America is exceptional has a long history, but, as calls to 'Make America Great Again' illustrate, its power is far from spent. America's political climate only makes books like John D. Wilsey's all the more important. In a study best described as theologically informed history of an idea, Wilsey surveys American exceptionalism from John Winthrop's 'city on a hill' to Ronald Reagan's 'new patriotism,' weaving together narrative, biographical sketches, exegetical insight, and critical evaluation. The result is a careful, winsome, and constructive treatment of an enduring and important feature of American Christianity. . . . Wilsey should be commended for providing a careful, accessible treatment of such a pertinent topic." -- Paul Gutacker, Fides et Historia, Summer/Fall 2016

"Evangelicals who increasingly feel tension in civil and cultural engagement should consider Wilsey's proposal of open exceptionalism. This approach is thoughtful, sophisticated, and also compatible with the Christian gospel." -- Paul A. Sanchez, Journal for Baptist Theology and Ministry, Fall 2016

▼▲
I'm the author/artist and I want to review American Exceptionalism and Civil Religion: Reassessing the History of an Idea - eBook.
Back
Back