Skip to main content
SPRING CYBER EVENT STARTS NOW: And it's a really BIG deal! Up to 88% off through 5/24>
American Evangelical Christianity
By: Mark A. Noll
Stock No: WW220003 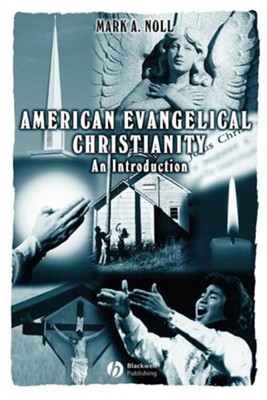 ▼▲
Evangelical Christianity was a predominant stream of religion during the early history of the United States. Mark Noll describes and interprets American Evangelical Christianity, utilising research by theologians, sociologists and political scientists, as well as the author's own historical interests, to explain the position Evangelicalism now occupies at the beginning of the new century. Evangelical Christians existed as a large but disintegrating force for the first half of the twentieth century, developing into an increasingly visible presence over recent decades. Noll examines their frequently misunderstood political bearing over the latter half of the last century, arguing that exploitation of the resources of Evangelical theology might improve the quality of Evangelical politics. The central concern of the book is to sell American Evangelical Christianity as a form of 'culturally adaptive biblical experimentalism' and to show why this portrayal makes sense of both Evangelical religion and the place of Evangelicals in American religion. This book is intended to provide insights for Evangelicals, and even more so for those who aren't, into the meaning of Evangelical activities, aspirations and ideologies throughout American history. It provides a fascinating insight into a stream of religion which now exerts a considerable social, political and cultural force.

▼▲
Mark Noll describes and interprets American Evangelical Christianity, utilising research by theologians, sociologists and political scientists, as well as the author's own historical interests, to explain the position Evangelicalism now occupies at the beginning of the new century.

Mark A. Noll is McManis Professor of Christian Thought at Wheaton College, Illinois, and the author and editor of many bestselling books and articles, including Turning Points: Decisive Moments in the History of Christianity, The Scandal of the Evangelical Mind, and A History of Christianity in the United States and Canada. His most recent book is Protestants in America. In 1998 he inaugurated the McDonald Family Visiting Chair in Evangelical Theological Studies at the Harvard Divinity School.

▼▲
"Noll ... has articulated a fair, judicious, comprehensive and original survey of American evangelical theology from the earliest colonial beginnings to the present day. He goes well beyond the usual traditional rat-a-tat-tat historical profile by adding new features that provoke the reader's interest: sections on beliefs, regions, classes and genders, and what he calls 'flash points' (Roman Catholic, science and politics), concluding with with 'Evangelicalism at its Best' and 'Learning a Lesson from Canada'." Choice


"The book is a good starting point on its subject, full as it is of suggested further readings on a number of contemporary flash points of opinion" Evangelicals Now

"This book...demonstrates yet again the impeccability of Noll's scholarship. His careful mastery of the historian's craft, his massive bibliographical knowledge, his clarity of style and civility of approach - all these serve to answer his own complaints about the "scandal of the evangelical mind". Noll has an evangelical mind that, far from being small and closed, is both capacious and generous." First Things

"Noll presents solid data that sometimes shatters evangelicals' favourite self-references as well as stereotypes of outsiders. American Evangelical Christianity clearly, capably, and fairly describes one of the world's leading contemporary religious movements as of the beginning of the new millennium." Journal of Contemporary Religion

"The scholarship here is as much a look forward as it is a look back. It thus serves to advance conversations about the manner in which evangelicals have been and will be movers and shakers in the formation of American cultures." Review and Expositor

"Noll offers not only an attractive portrayal of evangelical beliefs and practices, but an accurate one as well. This work will interest both Evangelicals and non-Evangelicals." Journal of Religion

"The book is a fine introduction for beginners, a text for students and a challenge to those who are committed to the enhancement of the gospel, as Evangelical or other Christian." Jeffrey Gros, Secretariat for Ecumenical and Interreligious Affairs

"Premier evangelical scholar Mark Noll has once again provided a helpful contribution to the ongoing conversation regarding the nature of American evangelicalism." Journal of Church and State

▼▲
I'm the author/artist and I want to review American Evangelical Christianity.
Back