We are OPEN and SHIPPING - click here for shipping estimates
American Dreams: Restoring the Land of Opportunity - eBook
By: Senator Marco Rubio 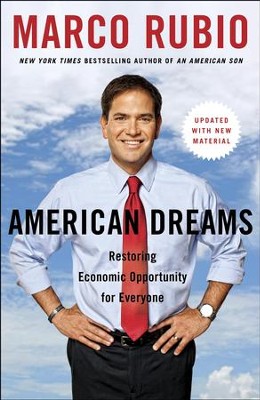 In 1956, Marco Rubio’s parents came to America as poor immigrants with grade-school educations. They found a land of opportunity where anyone could work hard, play by the rules, and build a better future for themselves and their children. His family proved the reality of the American Dream, where the children of maids and bartenders could become doctors, lawyers, small business owners, and maybe even a U.S. senator.

But now the American Dream is on life support. Years of government-centered, tax-and-spend liberalism have failed to lift the poor or sustain the middle class. Millions of everyday Americans have been left behind by an economy that doesn’t value their skills and a government that would rather give them a handout than a hand up.

In this follow-up to his bestselling memoir, An American Son, Senator Rubio offers a road map for restoring the land of opportunity. He explains why we now stand at a critical junction and why the next few years will determine the future for our children and grandchildren. He shares his plan for scaling back the nanny state, helping families save for college and retirement, and making it easier for small businesses to create millions of good jobs. Above all, he urges us to return to the values and can-do spirit that made our country exceptional in the first place.

▼▲
MARCO RUBIO served in the Florida House of Representatives from 2000 to 2008 and was elected Speaker of the House in 2006. In 2010, he was elected to the U.S. Senate. His first book, An American Son, was a New York Times bestseller. He and his wife, Jeanette, have four young children and live in West Miami. His new book is American Dreams: Restoring Economic Opportunity for Everyone.

▼▲
"Readers of American Dreams will quickly observe a bold conservative plan with a realistic trajectory. Other presidential candidates would do well to note his refreshing plan over political naysaying."
- Eric Bledsoe, Conservative Book Club

"[American Dreams] is well worth reading, if for no other reason than that it gives precise illustrations on how the present system is ruining lives and needs to be fixed, or eliminated so that people can become successful again."
- IntellectualConservative.com

▼▲
I'm the author/artist and I want to review American Dreams: Restoring the Land of Opportunity - eBook.
Back
×
Back
×