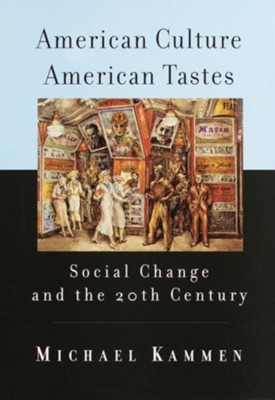 ▼▲
Americans have a long history of public arguments about taste, the uses of leisure, and what is culturally appropriate in a democracy that has a strong work ethic. Michael Kammen surveys these debates as well as our changing taste preferences, especially in the past century, and the shifting perceptions that have accompanied them.

Professor Kammen shows how the post-traditional popular culture that flourished after the 1880s became full-blown mass culture after World War II, in an era of unprecedented affluence and travel. He charts the influence of advertising and opinion polling; the development of standardized products, shopping centers, and mass-marketing; the separation of youth and adult culture; the gradual repudiation of the genteel tradition; and the commercialization of organized entertainment. He stresses the significance of television in the shaping of mass culture, and of consumerism in its reconfiguration over the past two decades.

Focusing on our own time, Kammen discusses the use of the fluid nature of cultural taste to enlarge audiences and increase revenues, and reveals how the public role of intellectuals and cultural critics has declined as the power of corporate sponsors and promoters has risen. As a result of this diminution of cultural authority, he says, definitive pronouncements have been replaced by divergent points of view, and there is, as well, a tendency to blur fact and fiction, reality and illusion.

An important commentary on the often conflicting ways Americans have understood, defined, and talked about their changing culture in the twentieth century.

▼▲
Michael Kammen is the Newton C. Farr Professor of American History and Culture at Cornell University, where he has taught since 1965. A past president of the Organization of American Historians, he is the author or editor of numerous works, including People of Paradox, which won the Pulitzer Prize in History in 1973, and he has lectured throughout the world.

▼▲
I'm the author/artist and I want to review American Culture, American Tastes: Social Change and the 2th Century - eBook.
Back
Back