Skip to main content
SPRING CYBER EVENT STARTS NOW: And it's a really BIG deal! Up to 88% off through 5/24>
American Connections: The Founding Fathers. Networked.
By: James Burke
Stock No: WW3282264 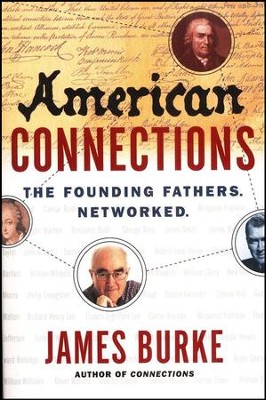 ▼▲
Using the unique approach that he has employed in his previous books, author, columnist, and television commentator James Burke shows us our connections to the fifty-six men who signed the Declaration of Independence. Over the two hundred-plus years that separate us, these connections are often surprising and always fascinating. Burke turns the signers from historical icons into flesh-and-blood people: Some were shady financial manipulators, most were masterful political operators, a few were good human beings, and some were great men. The network that links them to us is also peopled by all sorts, from spies and assassins to lovers and adulterers, inventors and artists. The ties may be more direct for some of us than others, but we are all linked in some way to these founders of our nation.

▼▲
James Burke is the author of several bestselling books, including Circles, American Connections, and The Knowledge Web. He is a monthly columnist at Scientific American and also serves as director, writer, and host of the television series Connections 3 on The Learning Channel. He is the founder of the James Burke Institute for Innovation in Education, whose flagship project, the Knowledge Web, an interactive website, was recently launched. He lives in London.

▼▲
I'm the author/artist and I want to review American Connections: The Founding Fathers. Networked..
Back
Back