Skip to main content
SPRING CYBER EVENT STARTS NOW: And it's a really BIG deal! Up to 88% off through 5/24>
The American Empire and the Commonwealth of God: A Political, Economic, Religious Statement
By: David Ray Griffin, John B. Cobb Jr.
Stock No: WW230091 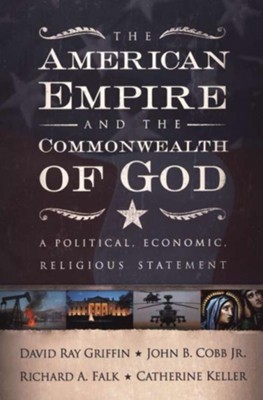 The American Empire and the Commonwealth of God: A Political, Economic, Religious Statement

▼▲
Four distinguished authors here level a powerful critique of the rapid expnasion of the emerging American empire and its oppressive and destructive political, military, and economic policies. The authors demonstrate how America's imperialism inevitably leads to rampant irreversible ecological devastation, expanding military force for imperialistic purposes. These four prophetic voices-three Christians and one Jew-persuasively indict the American empire as being diametrically opposed to divine values and powerful enough to threaten the purposes of God.

In this book, four distinguished scholars level a powerful critique of the rapid expansion of the emerging American empire and its oppressive and destructive political, military, and economic policies. Arguing that a global Pax Americana is internationally disastrous, the authors demonstrate how America's imperialism inevitably leads to rampant irreversible ecological devastation, expanding military force for imperialistic purposes, and a grossly inequitable distribution of goods--all leading to the diminished well-being of human communities.

▼▲
David Ray Griffin is Professor Emeritus of Philosophy and Theology at Claremont School of Theology, Professor Emeritus of Religion at Claremont Graduate University, and Co-Founder of the Center for Process Studies. He is the author of Two Great Truths: A New Synthesis of Scientific Naturalism and Christian Faith, and coauthor, with John B. Cobb Jr., of Process Theology: An Introductory Exposition. Author of numerous books in philosophy of religion, he has also published two popular books on the World Trade Center attacks: The New Pearl Harbor: Distubing Questions About the Bush Administration and 9/11 and The 9/11 Commission Report: Omissions and Distortions. John B. Cobb Jr. has held many positions including Ingraham Professor of Theology at the Claremont School of Theology, Avery Professor at the Claremont Graduate School, Fullbright Professor at the University of Mainz, and Visiting Professor at Vanderbilt, Harvard, and Chicago Divinity Schools. His writings include Christ in a Pluralistic Age: God and the World; and, with coauthor Herman Daly, For the Common Good, which was cowinner of the Grawemeyer Award for Ideas Improving World Order. Richard A. Falk is Albert G. Milbank Professor Emeritus of International Law and Practice at Princeton University in Princeton, New Jersey. His books include The Great Terror War, Religion and Human Global Governance, and Human Rights Horizons. Falk is an Honorary Member of the Board of Editors of the American Journal of Internation Law and a Member of the Editorial Board of The Nation and The Progressive.

▼▲
What do you get when you put three theologians together with an attorney? Not a joke, but a deadly serious, academic analysis of our nation, its past and its future. This collection of nine essays addresses the ideological and practical evidence and consequences of what the authors see as an often disguised imperial agenda inherent in the founding and development of the United States. The authors, besides sharing the conviction that the United States "is seeking to become the world's first borderless empire" whose imperialist policies constitute "the primary threat to the survival of the human species," share an affinity for the philosophy of Alfred North Whitehead. While they object to imperialism on "political, economic and ecological grounds" as well as on "religious-spiritual-moral grounds," they spend most of the book making their secular statement; only the last three essays speak directly of religion. Keller's contribution contains a particularly interesting "debate" between the people she calls "Bush-Doctrine Idealists and the great idol-smasher John Calvin." Students of American history, government and political science, will feel quite at home within these pages, but nonacademics may need to dust off their college texts to remember the particulars of, say, the Marshall Plan. (June) Copyright 2006 Reed Business Information.

▼▲
I'm the author/artist and I want to review The American Empire and the Commonwealth of God: A Political, Economic, Religious Statement.
Back
Back