We are OPEN and SHIPPING - click here for shipping estimates
PRE-SUMMER CYBER SALE EXTENDED thru 6/1 ~ Over 2,500 items up to 90% off
American Colonies: The Settling of North America (The Penguin History of the United States, Volume1) - eBook
By: Alan Taylor 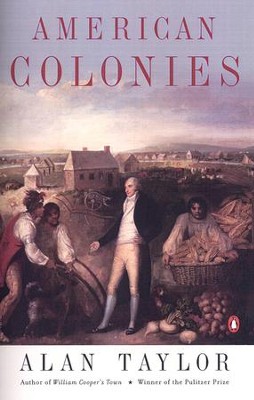 American Colonies: The Settling of North America (The Penguin History of the United States, Volume1) - eBook

▼▲
A multicultural, multinational history of colonial America from the Pulitzer Prize-winning author of The Internal Enemy and American Revolutions

In the first volume in the Penguin History of the United States, edited by Eric Foner, Alan Taylor challenges the traditional story of colonial history by examining the many cultures that helped make America, from the native inhabitants from milennia past, through the decades of Western colonization and conquest, and across the entire continent, all the way to the Pacific coast.

Transcending the usual Anglocentric version of our colonial past, he recovers the importance of Native American tribes, African slaves, and the rival empires of France, Spain, the Netherlands, and even Russia in the colonization of North America. Moving beyond the Atlantic seaboard to examine the entire continent, American Colonies reveals a pivotal period in the global interaction of peoples, cultures, plants, animals, and microbes. In a vivid narrative, Taylor draws upon cutting-edge scholarship to create a timely picture of the colonial world characterized by an interplay of freedom and slavery, opportunity and loss.

"Formidable . . . provokes us to contemplate the ways in which residents of North America have dealt with diversity." -The New York Times Book Review

▼▲
Alan Taylor’s books include William Cooper’s Town: Power and Persuasion on the Frontier of the Early American Republic, which won the 1996 Pulitzer Prize for history and the Bancroft Prize in American History; The Internal Enemy, also awarded the Pultizer Prize; The Divided Ground: Indians, Settlers, and the Northern Borderland of the American Revolution. Taylor holds the Thomas Jefferson Chair in American History at the University of Virginia.

▼▲
I'm the author/artist and I want to review American Colonies: The Settling of North America (The Penguin History of the United States, Volume1) - eBook.
Back
×
Back
×