Skip to main content
The American Church that Might Have Been: A History of the Consultation on Church Union - eBook
By: Keith Watkins
Stock No: WW109982EB 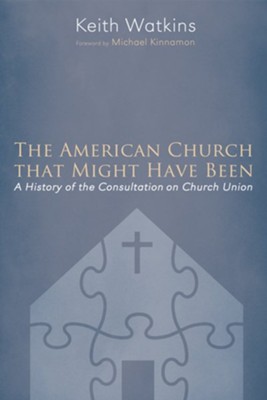 The American Church that Might Have Been: A History of the Consultation on Church Union - eBook

▼▲
During a forty-year period ending in 2002, leaders of major American churches tried to unite their members, ministries, and public service in a new church they named A Church of Christ Uniting. Participating in this movement were four Methodist Churches, the Episcopal Church, the nation's largest Presbyterian Church, the United Church of Christ, the Christian Church (Disciples of Christ), and the International Council of Community Churches. With a membership of close to twenty million, this church would have been spread throughout the nation more fully than any other church except the Roman Catholic. Leaders of the movement believed that this union would enable church members to experience their Christian life more fully. It would heal divisions that had existed since the Protestant Reformation 450 years earlier and displace the denominational system that was increasingly dysfunctional. By coming together in a new way, these churches could work more effectively at overcoming problems in American life--especially the challenges related to racism. Although the Consultation on Church Union (COCU) closed before converting its vision into a new form of the church, it had a significant effect on these churches and the nation. This is a story that needs to be remembered.

▼▲
Keith Watkins is a minister ordained in the Christian Church (Disciples of Christ) and professor emeritus at Christian Theological Seminary. His books include The Great Thanksgiving: The Eucharistic Norm of Christian Worship and A Visible Sign of God's Presence: A History of the Yakama Christian Mission. He was a member of COCU's Commission on Worship and held memberships in the North American Academy of Liturgy and the Consultation on Common Texts.

▼▲
I'm the author/artist and I want to review The American Church that Might Have Been: A History of the Consultation on Church Union - eBook.
Back
Back