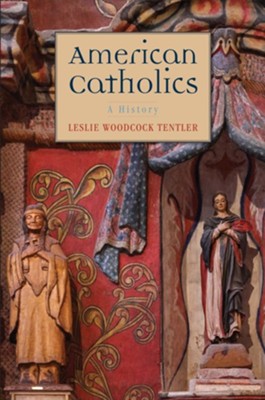 "Tentler does justice to James Joyce's quip that Catholicism means 'here comes everybody.' This is the story of everybody—lay people, sisters, priests—who was part of the church in the United States, a story insightfully analyzed and admirably told. A definitive synthesis." —James M. O’Toole, author of The Faithful

This comprehensive survey of Catholic history in what became the United States spans nearly five hundred years, from the arrival of the first Spanish missionaries to the present. Distinguished historian Leslie Tentler explores lay religious practice and the impact of clergy on Catholic life and culture as she seeks to answer the question, What did it mean to be a "good Catholic" at particular times and in particular places?

In its focus on Catholics’ participation in American politics and Catholic intellectual life, this book includes inâ·depth discussions of Catholics, race, and the Civil War; Catholics and public life in the twentieth century; and Catholic education and intellectual life. Shedding light on topics of recent interest such as the role of Catholic women in parish and community life, Catholic reproductive ethics regarding birth control, and the Catholic church sex-abuse crisis, this engaging history provides an up-to-date account of the history of American Catholicism.

▼▲
Leslie Woodcock Tentler is professor emerita in the department of history at the Catholic University of America and the author of Catholics and Contraception: An American History.

▼▲
"Illuminates myriad topics sure to fascinate not only Catholics, but anyone interested in a major religion's impact on American life and culture."—Catholic Standard

"Tentler does justice to James Joyce's quip that Catholicism means '"here comes everybody."' This is the story of everybody—lay people, sisters, priests—who was part of the church in the United States, a story insightfully analyzed and admirably told. A definitive synthesis." —James M. O’Toole, author of The Faithful

"Tentler's talents as a historian and writer are on abundant display in this beautifully crafted chronicle of almost five centuries of Catholics' experience in America. Readers will appreciate Tentler's candor about the myriad challenges facing the church, while many will find comfort in her cautious optimism that the same elements that enriched the Catholic past may yet redeem its future."—Kathleen Sprows Cummings, author of A Saint of Our Own

"American Catholics is a masterful study of U.S. Catholicism that will immediately engage readers. This meticulously researched, comprehensive history captures the rich diversity and complexity of a church and its people that have played an important role in the broader history of the United States."—Margaret M. McGuinness, author of Called to Serve: A History of Nuns in America

"Elegantly written, American Catholics is a thrilling achievement. No better introduction to the current fraught moment in American Catholic history exists and none could be more necessary."— John T. McGreevy, author of American Jesuits and the World

"Whether unpacking the intricacies of the colonial age or the era of the sex abuse crisis, American Catholics is resplendent with insight. This is the finest, most-up to-date and sophisticated treatment available. It will be the go-to volume for a generation of readers."— James P. McCartin, author of Prayers of the Faithful

▼▲
I'm the author/artist and I want to review American Catholics: A History.
Back