Skip to main content
SPRING CYBER EVENT STARTS NOW: And it's a really BIG deal! Up to 88% off through 5/24>
American Catholicism, Edition 0002Second Edition,
Edited By: Daniel J. Boorstin
By: John Ellis
Stock No: WW205564 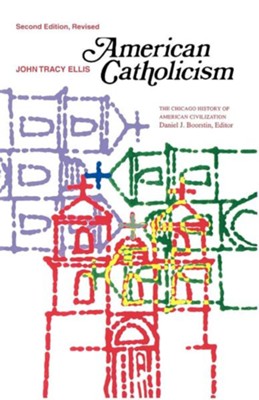 Edited By: Daniel J. Boorstin
By: John Ellis
More in Chicago History of American Civilization Series
University of Chicago Press / 2009 / Paperback
Write a Review
In Stock
Stock No: WW205564
Buy Item Our Price$46.25
In Stock
Quantity:
Stock No: WW205564
University of Chicago Press / 2009 / Paperback
Quantity:
Add To Cart
of These in Your Cart

▼▲
The Catholic Church remains one of the oldest institutions of Western civilization. It continues to withstand attack from without and defection from within. In his revision of American Catholicism, Monsignor Ellis has added a new chapter on the history of the Church since 1956. Here he deals with developments in Catholic education, with the changing relations of the Church to its own members and to society in general, and especially with arguments for and against the ecumenical movement brought about by Vatican Council II.
The author gives an updated historical account of the part played by Catholics in both the American Revolution and the Civil War, and of the difficulties within the Church that came with the clash of national interests among Irish, French, and Germans in the nineteenth century. He regards immigration as the key to the increasingly important role of American Catholicism in the nation after 1820. For contemporary America, the author counts among the signs of the mature Church an increase in Church membership, the presence of nine Americans in the College of Cardinals in May, 1967, and the expansion of American effort in Catholic missions throughout the world.

▼▲
I'm the author/artist and I want to review American Catholicism, Edition 0002Second Edition,.
Back