American Catholic: The Saints and Sinners Who Built America's Most Powerful Church
By: Charles Morris 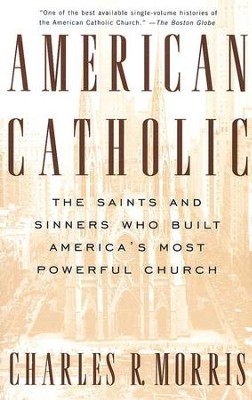 American Catholic: The Saints and Sinners Who Built America's Most Powerful Church

▼▲
Before the potato famine ravaged Ireland in the 1840s, the Roman Catholic Church was barely a thread in the Ameircan cloth. Twenty years later, New York City was home to more Irish Catholics than Dublin. Today, the United States boasts some sixty million members of the Catholic Church, which has become one of this country's most influential cultural forces. In this book, Charles R. Morris recounts the rich story of the rise of the Catholic Church in America, bringing to life the personalities that transformed an urban Irish subculture into a dominant presence nationwide. Here are the stories of rogues and ruffians, heros and martyrs-from Dorothy Day, a convert from Greenwich Village Marxism who opened shelters for thousands to Cardinal William OConnell, who ran the Church in Boston from a Renaissance palazzo, complete with golf course. As comprehensive as it is provocative, American Catholic is a tour de force, a fascinating cultural history that will engage and inform both Catholics and non-Catholics alike.

▼▲
Charles R. Morris has many highly praised books to his credit, ranging from Computer Wars (on the fall of IBM) to American Catholic (on the rise of the American Catholic Church). He has published his opinion pieces in The New York Times, The Wall Street Journal, The Atlantic Monthly, The New Republic, and the Harvard Business Review. For many years he was managing partner of a consulting firm specializing in the financial services and investment banking industries, and was also a group executive at Chase Manhattan bank.

▼▲
I'm the author/artist and I want to review American Catholic: The Saints and Sinners Who Built America's Most Powerful Church.
Back
×
Back
×