The American Catholic Almanac: A Daily Reader of Patriots, Saints, Rogues, and Ordinary People Who Changed the United States - eBook
By: Brian Burch 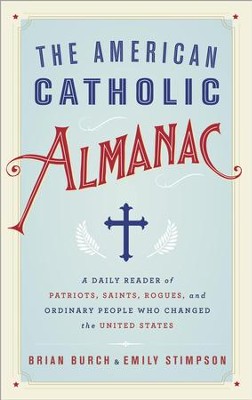 The American Catholic Almanac: A Daily Reader of Patriots, Saints, Rogues, and Ordinary People Who Changed the United States - eBook

They’re all Catholics who have shaped America. In this page-a-day history, 365 inspiring stories celebrate the historic contributions of American men and women shaped by their Catholic faith. From famous figures to lesser-known saints and sinners, The American Catholic Almanac tells the fascinating, funny, uplifting, and unlikely tales of Catholics’ influence on American history, culture, and politics. Spanning the scope of the Revolutionary War to Notre Dame football, this unique collection of stories highlights the transformative role of the Catholic Church in American public life over the last 400 years.

Did you know&hellip;
&bull; The first immigrant to arrive in America via Ellis Island was a 15-year-old Irish Catholic girl?
&bull; Al Capone’s tombstone reads "MY JESUS MERCY"?
&bull; Andrew Jackson credited America’s victory in the Battle of New Orleans to the prayers of the Virgin Mary and the Ursuline Sisters?
&bull; Five Franciscans died in sixteenth-century Georgia defending the Church’s teachings on marriage?
&bull; Jack Kerouac died wanting to be known as a Catholic and not only as a beat poet?
&bull; Catholic missionaries lived in Virginia 36 years before the English settled Jamestown?

▼▲
BRIAN BURCH is the president of CatholicVote.org, a nonprofit political advocacy group based in Chicago.

EMILY STIMPSON is a Catholic writer based in Steubenville, Ohio, and the
author of The Catholic Girl’s Survival Guide for the Single Years and These Beautiful Bones: An Everyday Theology of the Body.

▼▲
"Catholic means universal. But religion, like politics, is always local. In the pages of The American Catholic Almanac, we can spend every day as a feast in the company of our homegrown communion of saints. It's time we learned to boast, as St. Paul did, of the amazing graces that God has given — liberally and locally. It's time we learned to appreciate what is ours." -Mike Aquilina, co-author of The Feasts

"What a joy it is to have The American Catholic Almanac in my home! This unique resource is a testament to the rich and diverse history of Catholicism in the United States. You can browse just a few entries at a time, or do as I did, and devour the entire book in just a few days, but one thing is certain: You will come away inspired and encouraged by the witness and courage of those who have gone before us in the history of our Church and our nation." -Danielle Bean, Catholic author and Editor-in-Chief, Catholic Digest

"My first thought after reading The American Catholic Almanac is, ’Why didn’t someone think to write this decades ago!’ The saints and sinners, heroes and villains--and a few in between--who helped create our America are brilliantly and concisely given their due.  In these troubled times such examples illuminate a clear path forward for the Church Militant.  As Father Francis Parater, one of the more obscure heroes brought to life in its pages declared, ’Since my childhood, I have wanted to die for God and my neighbor. Shall I have this grace?’ It's long past time for us to regain such a burning desire for sacrifice, and to raise up a new generation of American Catholics that know both where they come from and the company they will join if they lovingly embrace self-denial, charity, and boldness in defense and promotion of the Faith." – Brian Brown, National Organization for Marriage

"If we don’t know our history as a believing people, we invite the world to invent it for us, with little regard for the facts or our convictions.  This is why The American Catholic Almanac is such a treasure.  Vividly written, filled with engaging historical detail and organized into easy readings for every day of the year, this is a wonderful record of the American Catholic experience." –Archbishop Charles J. Chaput, O.F.M. Cap., Archbishop of Philadelphia

"The American Catholic Almanac is a fascinating and exciting read.  Our country needs the witnesses of Catholics who have been extraordinary ’missionary disciples’ of Jesus Christ.  The American Catholic Almanac tells the stories of the men and women who have sought to know God, and to serve him, here in the United States.  This book will inspire a generation to strive for heroic sanctity in Christ." -Bishop James Conley, Diocese of Lincoln, NE

"From prelates and politicians, to Annie Moore, the first Irish Catholic immigrant to set foot on the newly opened Ellis Island, you will find it all here in this lively story of the Catholics who transformed the United States.  This engaging book will inspire all--both inside the Church and out. " -Anne Hendershott, Director of the Veritas Center for Ethics in Public Life at Franciscan University of Steubenville, Ohio

"The American Catholic Almanac is a daily scenic walk for anyone who seeks to do the work of rebuilding Catholic culture."  - Kathryn Jean Lopez, Editor-at-large of National Review Online

"The American Catholic Almanac is a timely book.  At a time when religious freedom is threatened, this book serves as a reminder of the great influence that Catholics have in the United States of America.  The book is filled with stories of Americans who have helped shape our culture and politics.  From the time Catholics arrived on these shores, they strove to be both Catholic and American.  This delightful and informative book suggests how we might still do that today." -James Nicholson, American Ambassador to the Vatican

"The American Catholic Almanac is a treasure trove of information and inspiration. In the great tradition of almanacs, Brian Burch and Emily Stimpson provide a daily account of events reflecting the role and experience of Catholics in America. It is a delightful read." -Cardinal Donald W. Wuerl, Archbishop of Washington D.C.

▼▲
I'm the author/artist and I want to review The American Catholic Almanac: A Daily Reader of Patriots, Saints, Rogues, and Ordinary People Who Changed the United States - eBook.
Back
×
Back
×