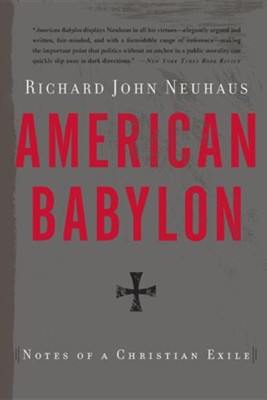 ▼▲
Christians are by their nature a people out of place. Their true home is with God; in civic life, they are alien citizens “in but not of the world.” In American Babylon, eminent theologian Richard John Neuhaus examines the particular truth of that ambiguity for Catholics in America today.

Neuhaus addresses the essential quandaries of Catholic life—assessing how Catholics can keep their heads above water in the sea of immorality that confronts them in the world, how they can be patriotic even though their true country is not in this world, and how they might reconcile their duties as citizens with their commitment to God. Deeply learned, frequently combative, and always eloquent, American Babylon is Neuhaus's magnum opus—and will be essential reading for all Christians.

▼▲
Richard John Neuhaus, one of the foremost authorities on religion in the contemporary world and president of the Institute on Religion and Public Life, is the editor-in-chief of First Things. He was named one of the “25 Most Influential Evangelicals in America” by Time Magazine. His many books include Freedom for Ministry, Death on a Friday Afternoon, and As I Lay Dying. He is a priest of the Archdiocese of New York and lives in Manhattan.

▼▲
New York Times Book Review
“American Babylon displays Neuhaus in all his virtues – elegantly argued and written, fair-minded and with a formidable range of reference – making the important point that politics without an anchor in a public morality can quickly slip away in dark directions.”

National Review
“In word and deed alike, Neuhaus provided as much ‘spiritual energy for existing goals of change' as any figure of his era. But it's a testament to his own capaciousness that we will be able to turn to him for guidance and inspiration even in eras vastly different from his own.”

The Weekly Standard
“A final, uniquely Christian reflection on making one's way in America.... American Babylon remains an important book at a critical moment in history.”

The American Spectator
“[A] short, dense meditation on what it means to live ‘our awkward duality of citizenship,' as both Christians and Americans, with integrity.... American Babylon can be read as a kind of valedictory or summation of many of the intellectual arguments that have preoccupied Father Neuhaus in his previous writings.”

▼▲
I'm the author/artist and I want to review American Babylon: Notes of a Christian Exile.
Back
×