Skip to main content
The American Bible-Whose America Is This?: How Our Words Unite, Divide, and Define a Nation - eBook
By: Stephen Prothero
Stock No: WW71295EB 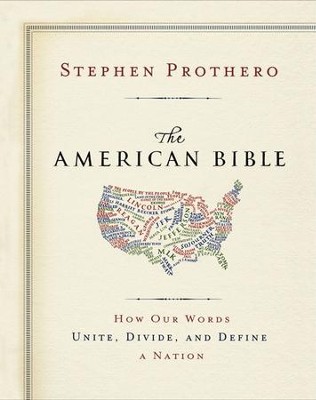 The American Bible-Whose America Is This?: How Our Words Unite, Divide, and Define a Nation - eBook

Bestselling author Stephen Prothero addresses the question of "Whose America is this," by exploring American political discourse and the significant texts that make up the living history of the American people.

American politics is broken because we have forgotten how to talk with one another. Instead of arguing on behalf of of our nation, we argue on behalf of our party.

The American Bible: How Our Words Unite, Divide, and Define a Nation reacquaints us with the oft-quoted (and misquoted) speeches, songs, and sayings that animate our politics, inspire social action, and drive our debates about who is—and is not—a real American. It reconnects us with a surprising tradition of civility that manages to be both critical of Americans shortcomings and hopeful for positive change.

To explore these "scriptures," is to revisit what Americans have said about liberty and equality and to revitalize our ongoing conversation about the future of the American experiment.

Stephen Prothero is the New York Times bestselling author of Religious Literacy and God Is Not One and a professor of religion at Boston University. His work has been featured on the cover of TIME magazine, The Oprah Winfrey Show, The Daily Show with Jon Stewart, The Colbert Report, NPR, and other top national media outlets. He writes and reviews for the New York Times, The Wall Street Journal, Boston Globe, The Washington Post, USA Today, Los Angeles Times, Salon, Slate, and other publications. Visit the author at www.stephenprothero.com or follow his tweets @sprothero.

“In these pages Stephen Prothero has brilliantly captured the American spirit-a spirit that has always seen us through hours of division and disagreement. With Prothero’s expert analysis, these texts should spark civil conversation, informed debate, and intelligent discussion.” — -Jon Meacham, Pulitzer Prize-winning author of American Lion.

“There are certain speeches, songs, books, letters, laws, and axioms that Americans honor enough to argue about, says religion scholar Stephen Prothero. Like the Declaration of Independence, this almost consecrated canon inspires endless commentary about what it means to be American-and what ‘America’ means.” — Religion News Service

“Required for putting in one place so many historic pieces that are more opined over than actually read. Awesome scholarship to an admirable purpose.” — Kirkus Reviews (starred review)

“In The American Bible, Prothero has turned his considerable talents to assembling a version of the American canon. The author’s prose is, as usual, spritely, informed and incisive.” — Washington Post

▼▲
I'm the author/artist and I want to review The American Bible-Whose America Is This?: How Our Words Unite, Divide, and Define a Nation - eBook.
Back
Back