Skip to main content
America: The Last Best Hope, Volume 3--From the Collapse of Communism to the Rise of Radical Islam
By: William J. Bennett
Stock No: WW554284 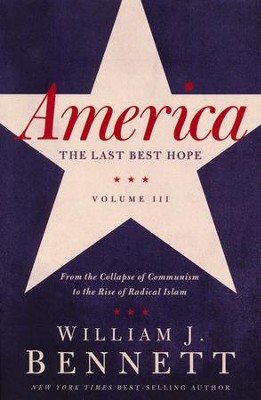 America: The Last Best Hope, Volume 3--From the Collapse of Communism to the Rise of Radical Islam

By: William J. Bennett
Thomas Nelson / 2011 / Paperback
4.5 out of 5 stars for America: The Last Best Hope, Volume 3--From the Collapse of Communism to the Rise of Radical Islam (2 Reviews) Write a Review
In Stock
Stock No: WW554284

▼▲
Get reacquainted with your heritage! In the third volume of Bennett's captivating history, you'll meet the famous men and women who shaped America's domestic and foreign policy---including John McCain, George W. Bush, and Barack Obama---and explore the country's pivotal role in world events and global conflict from 1988 to 2008. 336 pages, softcover.

America began to breathe easy at the close of the Cold War and loosened its grip on the fear of nuclear confrontation for the first time since World War Two. Peace was palpable, but in retrospect the years between 1988 and 2008 were as rocky as they were uncertain. Turbulence, not tranquility, marked the turn of the century: the war on drugs, race riots, values debates, deep economic shifts, and the growing threat of terrorism on U.S. soil that would tragically play out on September 11, 2001.

In this, the third volume of America: The Last Best Hope, William J. Bennett explores America's recent and momentous history: the fall of the Berlin Wall and the collapse of global Communism; sweeping changes in political and popular culture; the war on terror and the election of America's first African American president. Surveying the players, personalities, and pivotal moments, Bennett captures this recent chapter in the American story with piercing insight and unrelenting optimism.

▼▲
I'm the author/artist and I want to review America: The Last Best Hope, Volume 3--From the Collapse of Communism to the Rise of Radical Islam.
Back
Back