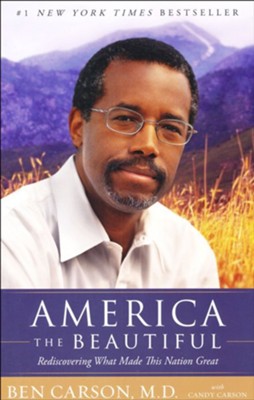 What is America becoming? Or, more importantly, what can she be if we reclaim a vision for the things that made her great in the first place? Join Dr. Ben Carson as he explores what made this nation great and discovers how we can find our way back.

In America the Beautiful, Dr. Ben Carson helps us learn from our past in order to chart a better course for our future. From his personal ascent from inner-city poverty to international medical and humanitarian acclaim, Carson shares experiential insights that help us understand:

Written by a man who has experienced America's best and worst firsthand, America the Beautiful is at once alarming, convicting, and inspiring. You'll gain new perspectives on our nation's origins, our Judeo-Christian heritage, our educational system, capitalism versus socialism, our moral fabric, healthcare, and much more.

An incisive declaration of the values that shaped America's past and must shape her future, America the Beautiful calls us all to use our God-given talents to improve our lives, our communities, our nation, and our world.

Dr. Benjamin S. Carson, Sr., M.D., became the chief of pediatric neurosurgery at Johns Hopkins Hospital in 1984 at the age of 33, making him the youngest major division director in the hospital's history. He has written and published nine books, four of which were co-authored with Candy,  his wife of 40 years. Dr. Carson was the recipient of the 2006 Spingarn Medal. In June 2008, he was awarded the Presidential Medal of Freedom. U.S. News Media Group and Harvard's Center for Public Leadership recognized Dr. Carson as one of "America's Best Leaders" in 2008. In 2014, the Gallup Organization, in their annual survey, named Dr. Carson as one of the 10 Most Admired Men in the World.

Dr. Carson and his wife are co-founders of the Carson Scholars Fund, which recognizes young people of all backgrounds for exceptional academic and humanitarian accomplishments. In addition, Dr. Carson is now the Honorary National Chairman of the My Faith Votes campaign and continues to work tirelessly for the cause of the American people.

Candy Carson is the co-founder (with her husband Ben) of the Carson Scholars Fund, a charity that recognizes and rewards high academic achievement and demonstrated humanitarian qualities. This organization was created in response to the US crisis in education. With the over 4300 scholars in 42 states, peers of the scholarship winners are now striving for higher academic results as well. Candy also serves on the board of the Shriver Concert Series of Johns Hopkins University. She has worked in editing, trust administration, insurance, and real estate, having earned her Masters in Business from Johns Hopkins. While her 3 sons were in their early teen years, she along with them formed the Carson 4, a string quartet which has performed at churches, and community and charitable events, nationally and internationally. In her spare time, Candy still enjoys reading books and reading music on violin and piano. She writes for THINK BIG, the newsletter for the Carson Scholars Fund, and conducts the University of Maryland Medical Center Chamber Players.

▼▲
I'm the author/artist and I want to review America the Beautiful.
Back
Back