Skip to main content
Can America Survive?: 10 Prophetic Signs That We Are The Terminal Generation - eBook
By: John Hagee
Stock No: WW8602EB 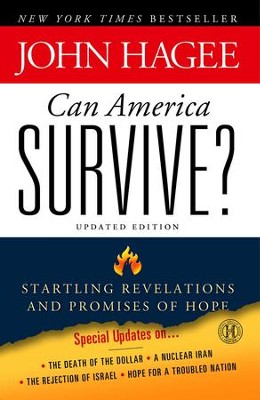 Can America Survive?: 10 Prophetic Signs That We Are The Terminal Generation - eBook

▼▲
The nuclear buildup in the Middle East . . . the death of the dollar . . . the criminalization of Christianity---what's going on? Will our country survive? In this compelling look at today's world, Hagee explores these and other global threats, showing how events could spiral out of control and lead to Armageddon by 2012. Features an interview with Benjamin Netanyahu.

▼▲
This paperback version of Pastor John Hagee's newest book has ripped-from-the-headlines updates. New material has been added regarding the death of the dollar, a nuclear Iran, and the rejection of Israel. Further, this New York Times best-selling author says the United States is heading into a “Perfect Storm.” Titanic. John F. Kennedy’s assassination. 9/11. John Hagee maintains that these American tragedies all have one element in common: they were unthinkable. And in the opening pages of his newest book, Can America Survive? Hagee uses these tragedies to prove two points: that the unthinkable can happen and, given the right conditions, the unthinkable can quickly become the inevitable.

In Can America Survive? Hagee asserts that the seeds for tragedy are once again being sown, evidenced by the disturbing economic, geopolitical, and religious trends that now threaten to dismantle the very nation itself. “Think it can’t happen?” Hagee asks in a theme repeated throughout the book. “Think again.” Indeed, Hagee presents alarming examples of recent events, current research, scientific evidence, and biblical prophecy that are gathering to create a “perfect storm” that could bring down the “unsinkable” United States of America including:

Can America Survive? is not just a warning. It is a wake-up call and a rallying cry to Christian citizens everywhere to prevent the next unthinkable American disaster. After all, as Hagee points out, “those who do not remember the mistakes of the past are doomed to repeat them in the future.” Think it can’t happen? Think again.

▼▲
Pastor John Hagee is the founder and senior pastor of in , a non-denominational evangelical church with more than 19,000 active members. He is the founder and chairman of Christians United for . He is also the president and C.E.O. of John Hagee Ministries, which telecasts his national radio and television ministry throughout and can be seen weekly in 99 million homes and in more than 200 nations worldwide.

John Hagee graduated from in , , then earned his Masters Degree from . He received his Theological Studies from Southwestern Assemblies of God University and an Honorary Doctorates from Oral Roberts University, Canada Christian College, and from in . He is the author of twenty-two major books including two New York Times bestsellers.

Pastor John Hagee and his wife Diana Castro Hagee have been blessed with five children and twelve grandchildren.

▼▲
I'm the author/artist and I want to review Can America Survive?: 10 Prophetic Signs That We Are The Terminal Generation - eBook.
Back
Back