Skip to main content
America, Have You Lost Your Mind, or Is it Your Soul?: Cant You Remember the Faith of Your Fathers, or Do You Want To? - eBook
By: Robbie Trussell
Stock No: WW33562EB 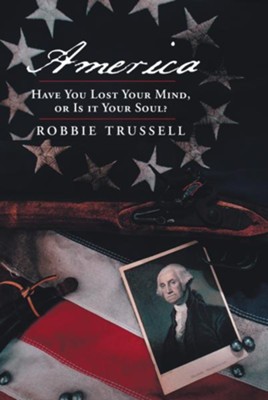 America, Have You Lost Your Mind, or Is it Your Soul?: Cant You Remember the Faith of Your Fathers, or Do You Want To? - eBook

What do you know about the United States of America?

According to a report from Newsweek magazine, 38 percent of Americans given a Newsweek citizenship test failed, most because they couldn’t define the Bill of Rights. In addition, more than half failed a standard civics test.

The Intercollegiate Studies Institute stated, “The Founding Fathers understood that our constitutional system and the liberty it protects could endure only if Americans retained an understanding of our founding principles.”

Some of those are: The New England Confederation stated that the purpose of the colonies was “to advance the Kingdom of our Lord Jesus Christ and to enjoy the liberties of the gospel in purity with peace.”

Harvard College required that each student believe that “the main end of his life and studies is to know God and Jesus Christ which is eternal life.”

In 1892, the Supreme Court of the United States declared, “this is a Christian nation.”

This volume has been put together to help you learn the truth about this uncommon nation and encourage you understand what caused it to be created. We must all stand in awe of the many incredible people who founded our exceptional country.

▼▲
I'm the author/artist and I want to review America, Have You Lost Your Mind, or Is it Your Soul?: Cant You Remember the Faith of Your Fathers, or Do You Want To? - eBook.
Back
Back