Skip to main content
SPRING CYBER EVENT STARTS NOW: And it's a really BIG deal! Up to 88% off through 5/24>
Armed America: The Remarkable Story of How and Why Guns Became as American as Apple Pie - eBook
By: Clayton E. Cramer
Stock No: WW4614EB 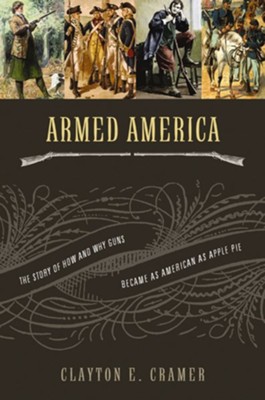 Armed America: The Remarkable Story of How and Why Guns Became as American as Apple Pie - eBook

"For many Americans, guns seem to be a fundamental part of the American experience?and always have been."

Grand in scope, rigorous in research, and elegant in presenting the formative years of our country, Armed America traces the winding historical trail of United States citizens' passion for firearms. Author and historial Clayton E. Cramer goes back to the source, unearthing first-hand accounts from the colonial times, through the Revolutionary War period, and into the early years of the American Republic.

In Armed America, Cramer depicts a budding nation dependent on its firearms not only for food and protection, but also for recreation and enjoyment. Through newspaper clippings, official documents, and personal diaries, he shows that recent grandiose theories claiming that guns were scarce in early America are shaky at best, and downright false at worst. Above all, Cramer allows readers a priceless glimpse of a country literally fighting for its identity.

For those who think that our citizens' attraction to firearms is a recent phenomenon, it's time to think again. Armed America proves that the right to bear arms is as American as apple pie.

▼▲
I'm the author/artist and I want to review Armed America: The Remarkable Story of How and Why Guns Became as American as Apple Pie - eBook.
Back
Back