Skip to main content
SPRING CYBER EVENT STARTS NOW: And it's a really BIG deal! Up to 88% off through 5/24>
The Idea of America: Reflections on the Birth of the United States - eBook
By: Gordon S. Wood
Stock No: WW48191EB 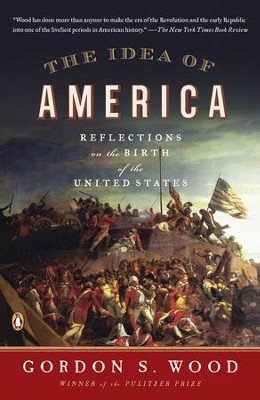 The Idea of America: Reflections on the Birth of the United States - eBook

▼▲
The preeminent historian of the American Revolution explains why it remains the most significant event in our history.

More than almost any other nation in the world, the United States began as an idea. For this reason, Pulitzer Prize-winning historian Gordon S. Wood believes that the American Revolution is the most important event in our history, bar none. Since American identity is so fluid and not based on any universally shared heritage, we have had to continually return to our nation's founding to understand who we are. In The Idea of America, Wood reflects on the birth of American nationhood and explains why the revolution remains so essential.

In a series of elegant and illuminating essays, Wood explores the ideological origins of the revolution-from ancient Rome to the European Enlightenment-and the founders' attempts to forge an American democracy. As Wood reveals, while the founders hoped to create a virtuous republic of yeoman farmers and uninterested leaders, they instead gave birth to a sprawling, licentious, and materialistic popular democracy.

Wood also traces the origins of American exceptionalism to this period, revealing how the revolutionary generation, despite living in a distant, sparsely populated country, believed itself to be the most enlightened people on earth. The revolution gave Americans their messianic sense of purpose-and perhaps our continued propensity to promote democracy around the world-because the founders believed their colonial rebellion had universal significance for oppressed peoples everywhere. Yet what may seem like audacity in retrospect reflected the fact that in the eighteenth century republicanism was a truly radical ideology-as radical as Marxism would be in the nineteenth-and one that indeed inspired revolutionaries the world over.

Today there exists what Wood calls a terrifying gap between us and the founders, such that it requires almost an act of imagination to fully recapture their era. Because we now take our democracy for granted, it is nearly impossible for us to appreciate how deeply the founders feared their grand experiment in liberty could evolve into monarchy or dissolve into licentiousness. Gracefully written and filled with insight, The Idea of America helps us to recapture the fears and hopes of the revolutionary generation and its attempts to translate those ideals into a working democracy.

▼▲
Gordon S. Wood is the Alva O. Way University Professor Emeritus at Brown University. His 1969 book, The Creation of the American Republic, 1776-1787, received the Bancroft and John H. Dunning prizes and was nominated for the National Book Award. His 1992 book, The Radicalism of the American Revolution, won the Pulitzer Prize and the Emerson Prize. His 2009 book, Empire of Liberty: A History of the Early Republic, 1789-1815, won the New-York Historical Society Prize in American History. In 2011 Wood was awarded a National Humanities Medal by President Obama.  Wood contributes regularly to the New Republic and the New York Review of Books.

▼▲
"Mr. Wood is the premier student of the Founding Era."
—Wall Street Journal

"When Gordon Wood says anything about America, people listen. Especially when he talks about the lessons of history, as he has for more than half a century now."
—Providence Journal

"Exceptional... a remarkable study of the key chapter of American history and its ongoing influence on American character."
—Publishers Weekly (starred review)

"It’s difficult to conjure another writer so at home in the period, so prepared to translate its brilliant strangeness for a modern audience. Sound, agenda-free analysis, gracefully presented."
—Kirkus Reviews

"Intellectually expansive and elegantly woven, Wood’s writings are the closest thing we have to an elegant mediation between today’s readers and the founding generation. Required reading for Revolutionary War enthusiasts on all levels."
—Library Journal

"[A] collection of nuanced, elegant essays. It’s hard to imagine a historian better trained to write on this subject."
—American Heritage

▼▲
I'm the author/artist and I want to review The Idea of America: Reflections on the Birth of the United States - eBook.
Back
Back