Skip to main content
CYBER MONDAY IS HERE! Shop savings up to 88%. >
To America: Personal Reflections of an Historian
By: Stephen E. Ambrose
Stock No: WW252128 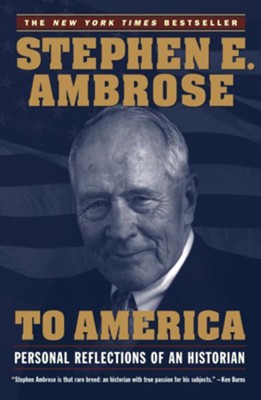 To America: Personal Reflections of an Historian

▼▲
In To America, Stephen E. Ambrose, one of the country's most influential historians, reflects on his long career as an American historian and explains what an historian's job is all about. He celebrates America's spirit, which has carried us so far. He confronts its failures and struggles. As always in his much acclaimed work, Ambrose brings alive the men and women, famous and not, who have peopled our history and made the United States a model for the world. Taking a few swings at today's political correctness, as well as his own early biases, Ambrose grapples with the country's historic sins of racism, its neglect and ill treatment of Native Americans, and its tragic errors (such as the war in Vietnam, which he ardently opposed on campus, where he was a professor). He reflects on some of the country's early founders who were progressive thinkers while living a contradiction as slaveholders, great men such as Washington and Jefferson. He contemplates the genius of Andrew Jackson's defeat of a vastly superior British force with a ragtag army in the War of 1812. He describes the grueling journey that Lewis and Clark made to open up the country, and the building of the railroad that joined it and produced great riches for a few barons. Ambrose explains the misunderstood presidency of Ulysses S. Grant, records the country's assumption of world power under the leadership of Theodore Roosevelt, and extols its heroic victory of World War II. He writes about women's rights and civil rights and immigration, founding museums, and nation- building. He contrasts the presidencies of Dwight Eisenhower, John F. Kennedy, Richard Nixon, and Lyndon B. Johnson. Throughout, Ambrose celebrates the unflappable American spirit. Most important, Ambrose writes about writing history. "The last five letters of the word 'history' tell us that it is an account of the past that is about people and what they did, which is what makes it the most fascinating of subjects." To America is an instant classic for all those interested in history, patriotism, and the love of writing.

▼▲
Completed shortly before Ambrose's untimely death, To America is a very personal look at our nation's history through the eyes of one of the twentieth century's most influential historians.

Ambrose roams the country's history, praising the men and women who made it exceptional. He considers Jefferson and Washington, who were progressive thinkers (while living a contradiction as slaveholders), and celebrates Lincoln and Roosevelt. He recounts Andrew Jackson's stunning defeat of a superior British force in the battle of New Orleans with a ragtag army in the War of 1812. He brings to life Lewis and Clark's grueling journey across the wilderness and the building of the railroad that joined the nation coast to coast. Taking swings at political correctness, as well as his own early biases, Ambrose grapples with the country's historic sins of racism; its ill treatment of Native Americans; and its tragic errors such as the war in Vietnam, which he ardently opposed. He contrasts the modern presidencies of Eisenhower, Kennedy, Nixon, and Johnson. He considers women's and civil rights, immigration, philanthropy, and nation building. Most powerfully, in this final volume, Ambrose offers an accolade to the historian's mighty calling.

▼▲
Stephen E. Ambrose was a renowned historian and acclaimed author of more than thirty books. Among his New York Times bestsellers are Nothing Like It in the World, Citizen Soldiers, Band of Brothers, D-Day - June 6, 1944, and Undaunted Courage. Dr. Ambrose was a retired Boyd Professor of History at the University of New Orleans and a contributing editor for the Quarterly Journal of Military History.

▼▲
Ken Burns Stephen Ambrose is that rare breed: an historian with true passion for his subjects.
Chicago Sun-Times An exciting classroom lecture by a well-beloved teacher.
The Knoxville News-Sentinel An excellent read...a must for history fans....To America is a love letter to the nation.
Jeff Guinn Fort Worth Star-Telegram Stunning....Stephen Ambrose should be assigned a special, honored place among modern historians....All of us who write or read history are in his debt.

▼▲
I'm the author/artist and I want to review To America: Personal Reflections of an Historian.
Back
Back