Skip to main content
SPRING CYBER EVENT STARTS NOW: And it's a really BIG deal! Up to 88% off through 5/24>
The Divided States of America?: What Liberals AND Conservatives are missing in the God-and-country shouting match! - eBook
By: Richard Land
Stock No: WW5845EB 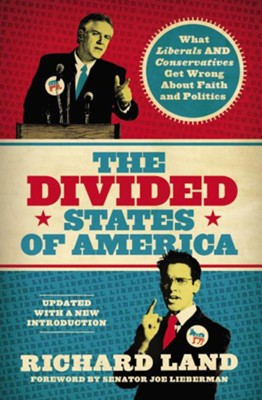 The Divided States of America?: What Liberals AND Conservatives are missing in the God-and-country shouting match! - eBook

▼▲
Offering a reasoned and well thought out perspective on a number of political and moral issues in the United States today, Richard Land takes a neutral approach in these matters regarding the future of America. He includes hot-button topics such as why religiously informed moral values are under threat in a one-sided interpretation of church and state, using the analogy of fair play in sports to explain the backlash against traditional moral values and empowers readers to clarify confusing viewpoints and motivating them to act on what they believe.

A popular look at the separation of church and state: what it is, what it isn't, and why it matters for the future of religion in America.

▼▲
Richard Land, Princeton and Oxford educated, has served as president of the Southern Baptist Convention's Ethics & Religious Liberty Commission since 1988. In 2005, Land was featured in Time magazine as one of "The 25 Most Influential Evangelicals in America."

▼▲
What's God got to do with America? Dr. Richard Land explores this question in his controversial new book The Divided States of America? Land explains that both the extreme right and extreme left misunderstand God's role in America: the Left thinks that God has nothing to do with America while the Right wrongfully considers America a Christian nation. He equates the country with the cause of freedom.
Like many of us, he is concerned about the growing polarization in the country. Though 80% of Americans claim that religion is important to them, immorality and paganism are both increasing.
President of the Southern Baptist Conventions' Ethics & Religious Liberty Commission since 1988 and a scholar, he recognizes that "(e)rosion of belief in God can lead to erosion of freedom if we pull the rug out from under it by exchanging a worldview that includes divine providence for a worldview that rejects any notion of transcendent authority" (76). He gives the history of the "wall of separation," explains its purpose in protecting religion from government, and praises it when justly administered.
After considering each side's concerns and dangers, he looks at our history as a spiritual nation. He discusses the separation of church and state. He refutes the claims that America is not exceptional, quoting both liberals and conservatives. He explains the Baptist historic position on "soul freedom:
This liberty of conscience transcends any and all political orders. Human freedom rooted in God declares that all states and all political orders are under God, limited not omnipotent. States can crush or kill human beings, but they cannot alienate them from their responsibility to God and conscience. (quoted from Michael Novak, p. 215)
Land's book is both interesting and controversial. Though he gives much helpful information and undermines the liberal claims, he takes positions which will make many readers unhappy, such as considering state-sponsored prayers in public schools wrong and Judge Roy Moore wrong for refusing to take the Ten Commandments down in his Alabama courtroom. He recommends that coaches who want to lead their students in prayer allow the students to lead and call on students from different religions each time. "He could ask Roger Smith to pray this time and Abe Solomon to pray next time and Abdul Rahman to pray after that--that way no one would need to feel necessarily excluded" (pp.132-3). Is not making someone feel excluded the purpose of prayer?
He admits that he disagrees with Dr. D. James Kennedy on America having been a Christian nation. Some readers may be put off by his warning that what Dominionist Christians want in this country could evolve into a Nazi-style government complete with persecution of those who disagree.
He deals with the three positions on religious liberty: avoidance, accommodation, and acknowledgment extensively.
Occasionally he seems to split hairs, such as when he writes that "America does not have a divine mission," but that "we have a sacred obligation and responsibility that is the direct consequence of God's providential and unique blessings" (p.195).
The book includes several appendices: on religious accommodation, the Barmen Declaration, scriptural passages that several of the American presidents have used when taking the Oath of Office, presidential addresses, the Universal Declaration of Human Rights, an address by Condoleezza Rice to the Southern Baptists, and a chart comparing views on religious liberty.
Land makes a lot of perceptive and thought-provoking comments, such as the tendency for some popular teaching on the End Times driving Christians from influencing society, and that our current understanding of human rights originates from America's founding fathers. His book will challenge, provoke thought, and perhaps from time to time irritate, but it is worth studying.  Debbie W. Wilson, Christian Book Previews.com

▼▲
I'm the author/artist and I want to review The Divided States of America?: What Liberals AND Conservatives are missing in the God-and-country shouting match! - eBook.
Back
Back