Skip to main content
The Enemy Within: Saving America from the Liberal Assault on our Churches, Schools, and Military
By: Michael Savage
Stock No: WW550135 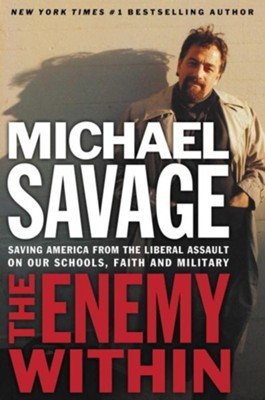 The Enemy Within: Saving America from the Liberal Assault on our Churches, Schools, and Military

▼▲
Talk radio sensation and New York Times best-selling author Michael Savage again goes for the jugular in this latest brash, incendiary attack on the corrosive effects of liberalism on our culture. There The Savage Nation took shots at everything under the political spectrum, this book focuses squarely on the dangers assailing the cornerstones of American life, pointing out how liberal propaganda and agendas are seeping into our churches, our schools, even our families. Bold, sometimes angry, and always controversial, this book is pure, no-hold-barred Michael Savage, one of the strongest, most original voices in America today.

America's bravest, brashest voice is back?as ferocious and cutting as ever.

"Where has six decades of radical, mad-dog  liberalism brought us?" Savage asks in his electrifying new book. "I'll tell you where: America is teetering on the cliffs of insanity."

Written with the fire, the conviction, and the clear vision of a modern-day prophet, Savage returns with a vengeance in this lightning rod of a book, speaking for all Americans who are fed up and ticked off at the corrosive influence of today's "psycho liberals"?the Democrats, as he calls them.

"They're speeding down the pathway of good intentions. Their mantra: Celebrate perversity, embrace ultra-tolerance, pay rape-a-nations (so-called reparations), support affirmative racism, and provide government subsidies for every illegal who sneaks across the border. In their haste to push failed socialist ideals, the libs have placed us on a crash course of total destruction."

Even while the heated controversy of his New York Times bestseller, The Savage Nation, still simmers, Michael Savage raises his weapons of matchless wit and moxie again, this time aiming his sights on the liberal assault on our most cherished institutions and taking a stand for our schools, our faith, our police and armed forces, and, most important, our families.

It isn't always pretty. You might even at times become uncomfortable. But as you read on, you'll find these pages always contain the Savage truth. That is how to fight the Enemy Within.

Filled with riotous rage and blistering humor, this book inspires as it enflames, encouraging Americans to reclaim our country, our government, our national integrity.

Michael Savage continues to soar as the No. 1 New York Times author of the The Savage Nation, The Enemy Within, and Liberalism Is a Mental Disorder. His program, The Michael Savage Show, airs on four hundred radio stations coast to coast (including WOR in New York and KNEW in San Francisco) and enjoys ten million weekly listeners, the nation's third largest talk radio audience. A man of the people, Savage has labored as a factory worker, teacher, social worker, medicinal plant explorer, and biologist, earning master's degrees in both medical botany and medical anthropology and a Ph.D. in epidemiology and nutrition science from the University of California at Berkeley. He is the founder and director of the Paul Revere Society, which supports our nation's right to defend and protect its borders, language, and culture.

▼▲
I'm the author/artist and I want to review The Enemy Within: Saving America from the Liberal Assault on our Churches, Schools, and Military.
Back
Back