Skip to main content
SPRING CYBER EVENT STARTS NOW: And it's a really BIG deal! Up to 88% off through 5/24>
America, Its Jews, and the Rise of Nazism
By: Gulie Ne'eman Arad
Stock No: WW338090 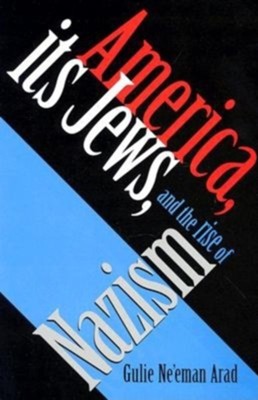 America, Its Jews, and the Rise of Nazism

"This meticulously researched and brilliantly argued account of American Jewry and the Nazi crisis is an outstanding achievement.... This is history at its best, a work of humane and balanced scholarship that unveils the nuances and ambiguities of the human experience. Framed within a compelling narrative, it is beautifully written with lucid restraint, yet deep compassion.... an essential corrective to an often misunderstood history." --Saul Friedlander

What did American Jews do to help the threatened Jewish communities of Europe as the Nazi grip tightened in the 1930s? Why didn't they do more to help Jews leave Europe and bring them to America? Probing these questions, Gulie Ne'eman Arad finds that, more than the events themselves, what was instrumental in dictating and shaping the American Jews' response to Nazism was the dilemma posed by their desire for acceptance by American society, on the one hand, and their commitment to community solidarity, on the other. When American Jews were faced with the desperate plight of European Jews after Hitler's accession to power, they were hesitant to press the case for immigration for fear of raising doubts about their own patriotism. In this gripping and thoroughly researched account, Arad contextualizes the American Jewish encounter with Nazism within the overall history of the American Jewish experience from the mid-19th century and offers a persuasive explanation of the ambivalent political response of American Jewish leaders in dealing with the Roosevelt administration.

▼▲
I'm the author/artist and I want to review America, Its Jews, and the Rise of Nazism.
Back