Skip to main content
America: The Last Best Hope (Volume II): From a World at War to the Triumph of Freedom - eBook
By: William J. Bennett
Stock No: WW4596EB 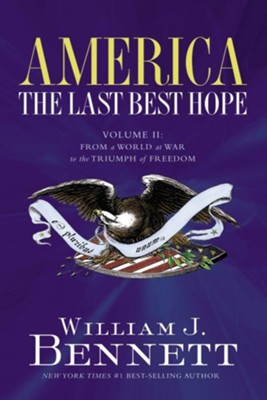 America: The Last Best Hope (Volume II): From a World at War to the Triumph of Freedom - eBook

▼▲
American belief in equality, William Bennett argues, is an "absolute of morals by which all men have a value invariable and indestructible and a dignity as intangible as death." This is what Bennett sees in America, and he believes, what allowed the United States to endure the catastrophic 20th Century. America persevered, grounded in its identity, through a century which witnessed the rise and fall of Socialist, Communist, and Facist totalitarian regimes, and it did so for no other reason than its belief in its own values. In this book Bennett explores that history and brings to life in a lucid and engaging style America's role in the 20th Century, now widely accepted as "The American Century." Anyone who want a balanced and fair look at the century from the American perspective, whether historian, student, or scholar need look no further than Bennett's two volume masterpiece America the Last Best Hope

▼▲
Respected scholar William Bennett reacquaints America with its heritage in the second volume of America: The Last Best Hope (Volume II). This engaging narrative slices through the cobwebs of time, memory, and prevailing cynicism to reinvigorate America with an informed patriotism.

▼▲
I'm the author/artist and I want to review America: The Last Best Hope (Volume II): From a World at War to the Triumph of Freedom - eBook.
Back
Back