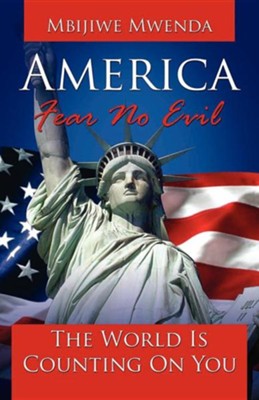 ▼▲
This book addresses the UNITED STATES OF AMERICA - the "Nation under God" - the foremost nation of this generation. With her destiny securely hid in God - for in "God We Trust" - this nation has been graced by Him to not only shape her future but that of other nations worldwide as well. This divine mandate - to oversee other nations - has most unfortunately brought her into confrontation with the evil forces that rule these nations. The greatest of these forces being FEAR - especially as propagated by terrorists. Terrorism has posed the greatest danger to universal freedom. And once more there is a summons for America to stand up against this dark threat of violence against the future. FEAR is the terrorists' greatest weapon. Therefore, our primary strategy to defeating terrorism is to refuse to fear. As said President F.D. Roosevelt "the only thing we have to fear is fear itself. which paralyzes needed efforts to convert retreat into advance." Rev. Mbijiwe Mwenda, a former Kenya Air Force officer, is the Founder and President of Resurrection Glory Ministries International (RGMI) and the Senior Pastor of the Glory Cathedral Church (GCC) based in Nairobi, Kenya. Known best internationally for his life-changing writings, he has authored several books including: Understanding Dreams and Visions; Identifying and Breaking Ungodly Family Altars; Identifying and Breaking Sexual Altars; Breaking the Curse of Poverty; God's Supernatural Power to Make Wealth and Seated With Christ in the Heavenly Places to Rule. He also writes for several Christian Magazines in Kenya including the authoritative Revival Springs magazine. He is married to Annie Zoe, and both live in Nairobi-Kenya, happily servingthe Lord.

▼▲
I'm the author/artist and I want to review America Fear No Evil.
Back