Skip to main content
SPRING CYBER EVENT STARTS NOW: And it's a really BIG deal! Up to 88% off through 5/24>
America-A Purpose-Driven Nation
By: Philip Michael Pantana Sr.
Stock No: WW666313 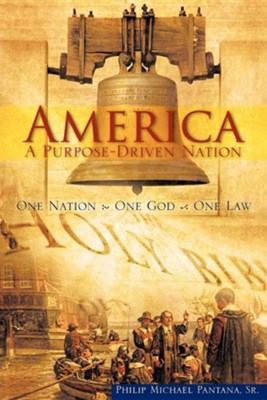 ▼▲
AMERICA-A PURPOSE - DRIVEN NATION ONE NATION ] UNITED ONE GOD ] JEHOVAH ONE LAW ] BIBLICAL Freedom of Religion The founding of America was Providential, not accidental. America was founded on purpose for a purpose-freedom to worship as people please. Christianity is the faith that gave birth to freedom of religion. Because of this spiritual heritage, America is known around the world for freedom the Bill of Rights ensures for all citizens, beginning with religious tolerance. Reversing Current Secular Trends What secularists are doing today is repressive to the First Amendment and offensive to Christians. The secularist agenda to enact "Hate Crimes" laws designed contrary to biblical principles is a destructive form of government opposing the consent of the governed. Ronald Reagan, hero of conservatives, said, "The frustrating thing is that those who are attacking religion claim they are doing it in the name of tolerance. Question: Isn't the real truth that they are intolerant of religion?" Reversing the current trend of secularization in American society involves making two essential changes: (1) quashing the unfriendly secularist war on faith; and (2) overturning activist Courts which limit Judeo-Christian expression in the public arena. Real Problems-Real Solutions This book features a Contract with Conservatives that offers real solutions to the vital issues "we the people" must come to grips with. Like German reformer Martin Luther in October of 1517, Pantana nails 95 theses of conservatism on the false walls, erected by secularists, which separate church from state. History is too filled with examples of this pattern for it to be ignored. The silent majority must let its voice be heard loud and clear at the ballot box in the 2008 election. For more information on the 95 proposals in the Contract with Conservatives visit www.purposedrivennation.com

▼▲
I'm the author/artist and I want to review America-A Purpose-Driven Nation.
Back