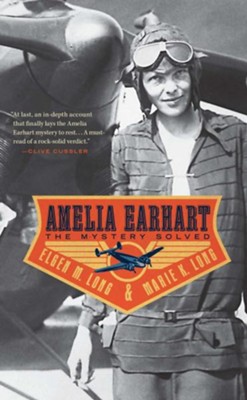 ▼▲
• The final answer on Amelia Earhart: Amelia Earhart puts to rest the speculation and rumors surrounding Earhart’s disappearance. The Longs prove that she was pushing the limits of technology and simply pushed too far. With the primitive conditions Earhart was flying under—no radar, unreliable communication—she missed Howland Island, her next stop..

• An expert author and pilot: Elgen Long has more than forty years of combat and civilian flying experience. During World War II, he flew planes virtually identical to the Electra that Earhart flew, making him one of the few living pilots who understands the conditions she flew under. Elgen and his wife, Marie, spent more than twenty-five years, interviewed more than 100 witnesses, and traveled more than 100,000 miles researching this book. .

• A new movie: Amelia , starring Hilary Swank, will be released by Fox Searchlight in fall 2009. The screenplay is based on three books, including Elgen and Marie Long’s Amelia Earhart , and Elgen Long served as a technical advisor to the film..

▼▲
Elgen M. Long is a retired Boeing 747 captain with more than 40,000 hours of worldwide airline flying spanning 50 years as a radioman and navigator, including over 100 U.S. Navy combat missions during World War II, and patrols over Howland Island, where Amelia Earhart disappeared. He is the holder of 15 world records and/or firsts, most notably as the first person to fly around the world solo, touching down on seven continents and flying over both the North and South Poles, in 1971.  Mr. Long lives in Reno, Nevada.

Marie K. Long, a former public relations consultant with the Western Aerospace Museum (now the Oakland Aviation Museum) in Oakland, CA., and wife of Elgen Long, passed away in 2003.

▼▲
Mary S. Lovell author of The Sound of Wings: The Life of Amelia Earhart This book will be indispensable to Earhart scholars and anyone interested in her story. It is based on solid research...the best study -- by far -- on this subject....In my own Earhart biography, I stated that if the Earhart mystery was ever to be cleared up, the Longs were the people most likely to do the clearing.
Clive Cussler At last, an in-depth account that finally lays the Amelia Earhart mystery to rest. Elgen and Marie Long lead us through the final flight and prove conclusively that Earhart and Noonan simply missed Howland Island, ran out of fuel, and set down in the sea. A must-read of a rock-solid verdict.
Reeve Lindbergh author of Under a Wing The quiet expertise and painstaking intelligence of this book are a tribute to all aviators and a real gift to aviation history.
Walter Boyne former director, National Air and Space Museum Amelia Earhart: The Mystery Solved is a turner. With compelling evidence in hand, Elgen and Marie Long demonstrate their mastery of the Earhart story, navigational technique, and pure logic to show the tragic reason for her loss and to offer the hope that her plane can be found. An utterly fascinating account of one of modern aviation's most famous mysteries.

▼▲
I'm the author/artist and I want to review Amelia Earhart: The Mystery Solved.
Back