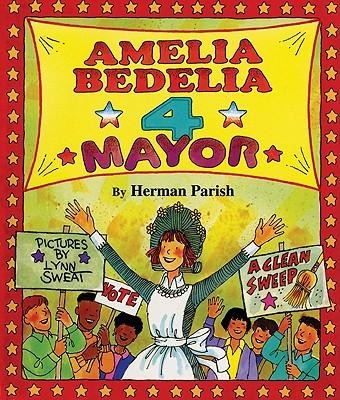 ▼▲
It all starts when Amelia Bedelia frosts the pancakes -- with chocolate frosting. Then, before you can say "irrepressible," Amelia Bedelia is running for the mayor's office. Literally. "A vote for me is a vote for the future," says her opponent. "A vote for me is a vote for Amelia Bedelia," says our heroine. But when you cast a vote, do you catch a fish? Amelia Bedelia's many fans will be rolling in the aisles as this Election Day comedy unfolds with one funny wordplay after another. Perfect for fall! Will be embraced by all! Not one reader left sitting on the fence! And those are not campaign promises!

Herman Parish was in the fourth grade when his aunt, Peggy Parish, wrote the first book about Amelia Bedelia. The author lives in Princeton, New Jersey.

▼▲
I'm the author/artist and I want to review Amelia Bedelia 4 Mayor.
Back
×