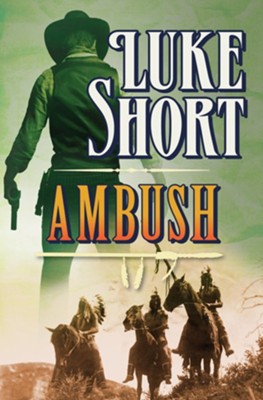 ▼▲
The US Army and a brutal Apache chief prepare for an epic showdown in the New Mexico desert in this novel from a master storyteller of the West.

Ward Kinsman has done all he can to escape civilization, spending the summer in a desert mountain range, deep in Apache territory, sifting for gold and praying he never sees another settler again. After a month of backbreaking work, he sees a trail of dust in the distance, and knows a white man has come to find him . . . which means the Apache are right behind.

The Apache leader is Diablito, or the Little Devil, a warrior so vicious even his own men fear his rage. He’s clever and unpredictable, and he hates Kinsman. The US Army has Diablito in its sights, and they want Kinsman to lead them to him. But finding the Little Devil will mean putting Kinsman’s own neck on the line—and risking the life of the most beautiful woman in the territory.

Made into a 1950 MGM film starring Robert Taylor, this tense western adventure, considered one of the genre’s best cavalry stories, is a classic example of Luke Short’s fiction. From its daring lone-wolf hero to its sweeping desert landscapes, Ambush is the American West at its roughest, toughest, and most exciting.

▼▲
Luke Short is the pen name of Frederick Dilley Glidden (1908–1975), the bestselling, award-winning author of over fifty classic western novels and hundreds of short stories. Renowned for their action-packed story lines, multidimensional characters, and vibrant dialogue, Glidden’s novels sold over thirty million copies. Ten of his novels, including Blood on the Moon, Coroner Creek, and Ramrod, were adapted for the screen. Glidden was the winner of a special Western Heritage Trustees Award and the Levi Strauss Golden Saddleman Award from the Western Writers of America.

Born in Kewanee, Illinois, Glidden graduated in 1930 from the University of Missouri where he studied journalism.  After working for several newspapers, he became a trapper in Canada and, later, an archaeologist’s assistant in New Mexico. His first story, "Six-Gun Lawyer," was published in Cowboy Stories magazine in 1935 under the name F. D. Glidden. At the suggestion of his publisher, he used the pseudonym Luke Short, not realizing it was the name of a real gunman and gambler who was a friend of Doc Holliday and Wyatt Earp. In addition to his prolific writing career, Glidden worked for the Office of Strategic Services during World War II. He moved to Aspen, Colorado, in 1946, and became an active member of the Aspen Town Council, where he initiated the zoning laws that helped preserve the town.

▼▲
I'm the author/artist and I want to review Ambush - eBook.
Back
Back