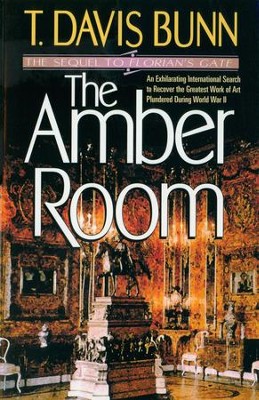 ▼▲
In Florian's Gate, T. Davis Bunn introduced his growing readership to the fascinating world of European art and antiques. During months of research, he discovered and pursued the legend of The Amber Room, an ensemble of precious 18th century wall panels that graced a tsarist palace in St. Petersburg. Stolen by Nazi invaders, it was carried off to a castle in East Prussia. Dubbed the "eighth wonder of the world," the treasure was last seen in 1945 during the chaotic scramble of men and borders during the end of the war. Was it destroyed by fire as officials claim, or was it mysteriously hidden away? "Unearthing the mystery" has led T. Davis Bunn to a maze of tunnels under a former Nazi headquarters in Weimar and to concrete SS bunkers in the hills of Jonastal.

Reaching back to the ravages of the war, the lessons of faith and forgiveness discovered in Florian's Gate continue in this momentous sequel. Alexander Kantor and his assistant Jeffrey join a trail of intrigue and cover-ups that surround the Amber Room, and it pulls them into a web of deception.

A metaphor for spiritual growth, the search for these treasures helps Alexander discover the paradox that greatness in God's eyes is expressed through humility. Jeffrey learns to apply the same zeal with which he hunts for artwork to his quest for the knowledge of God. Together they find a new understanding of human nature and divine love.

▼▲
Davis Bunn is the author of numerous bestsellers, with sales totaling more than six million copies. The winner of three Christy Awards for excellence in fiction, he is a lecturer in creative writing and Writer in Residence at Regent's Park College, Oxford University. Davis and his wife, Isabella, divide their time between England and Florida.

▼▲
I'm the author/artist and I want to review Amber Room, The - eBook.
Back
Back