We are OPEN and SHIPPING - click here for shipping estimates
PRE-SUMMER CYBER SALE: Shop over 2,500 items up to 90% off through 5/26 >
Amazing Peace: A Christmas Poem
By: Maya Angelou 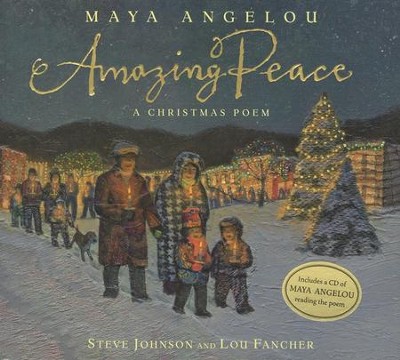 Sample Pages
Out of Stock This product is no longer available and cannot be added to your cart. We apologize for this inconvenience
No longer available.
Stock No: WW841507
Random House / 2008 / Hardcover

▼▲
Celebrate Christmas with the joyous poetry of the incomparable Maya Angelou.

Angelou’s beautiful, moving, and beloved poem, which she first read at the 2005 White House tree-lighting ceremony, now comes alive as a fully illustrated children’s book, celebrating the promise of peace in the holiday season. In this simple story, a family joins with their community—rich and poor, black and white, Christian, Muslim, and Jew—to celebrate the holidays.

This special package includes an audio CD of the author reading the poem aloud.

▼▲
Maya Angelou (1928–2014) was one of the most celebrated and distinguished voices of our time. She was an inspiring renaissance woman—poet, writer, performer, teacher, and director. In addition to her bestselling and internationally acclaimed autobiographies, beginning with I Know Why the Caged Bird Sings, she wrote five poetry collections, five books of essays, two cookbooks, and the celebrated poem "On the Pulse of Morning," which she read at the inauguration of President William Jefferson Clinton. Dr. Angelou was the recipient of three Grammys, the National Medal of Arts, the Presidential Medal of Freedom, and more than fifty honorary degrees. Learn more at mayaangelou.com.

Steve Johnson and Lou Fancher have collaborated on many award-winning and New York Times bestselling picture books. Their titles include My Many Colored Days, by Dr. Seuss; New York’s Bravest, by Mary Pope Osborne; The Velveteen Rabbit, by Margery Williams, adapted by Lou Fancher; The Cheese, by Margie Palatini; The Boy on Fairfield Street, by Kathleen Krull; and Star Climbing, by Lou Fancher. School Library Journal has called their work "luminous." You can visit them at johnsonandfancher.com.

▼▲
I'm the author/artist and I want to review Amazing Peace: A Christmas Poem.
Back
×
Back
×