Skip to main content
SPRING CYBER EVENT STARTS NOW: And it's a really BIG deal! Up to 88% off through 5/24>
Amazing Nearness: Meditations on the Eucharist
By: Fr. Tadeusz Dajczer
Stock No: WW601773 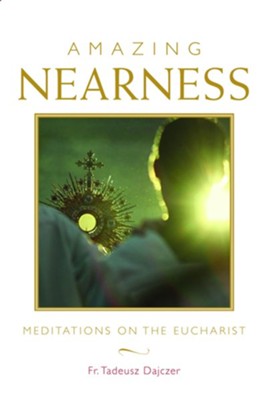 Amazing Nearness: Meditations on the Eucharist

▼▲
Father Tadeusz Dajczer wants you to discover the joy and profound gift that comes when we truly encounter Jesus in the Eucharist.

▼▲
The Reverend Tadeusz Dajczer is a Polish priest and the author of The Gift of Faith (known also as Enquiring Faith), which has been published in 102 editions all over the world since 1992, translated into twenty-eight languages, with more than 160,000 copies sold. Japanese and Bikol translations are in preparation, now. Fr. Dajczer graduated from the theological faculty in Warsaw. Later he studied at the Pontifical Gregorian University in Rome where he received his DD. For many years he worked as a professor at the Academy of Catholic Theology and the University of Cardinal Stefan Wyszynski in Warsaw. In 1994, he received the professor’s title of theological sciences from the President of Poland.

▼▲
I'm the author/artist and I want to review Amazing Nearness: Meditations on the Eucharist.
Back