Skip to main content
SPRING CYBER EVENT STARTS NOW: And it's a really BIG deal! Up to 88% off through 5/24>
Amazing Holiday Paws
By: Karen Petit
Stock No: WW686118 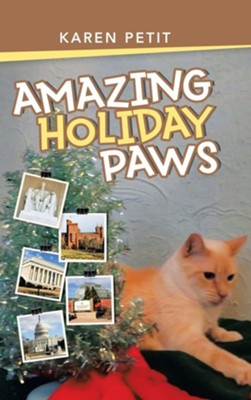 "The person pulled paper cash from the briefcase while spitting more words into D.C. Cat's face and pushing Cat's shoulders and fighting paws into the case, which was scratched by Cat's claws."

Like some of the other poems in AMAZING HOLIDAY PAWS, "Political Scratches from D.C.'s Dreaming Cat on National Cat Day" includes an animal's point of view: "Atop other tables stood people and cats; their noses shifted round while sniffing for rats." D.C. Cat-while homeless, dreaming, and wanting change-has a name; Cat interacts with people who have no names.

Many animal views are visible in AMAZING HOLIDAY PAWS. The different viewpoints include ferrets on New Year's Day, a groundhog's view of climate change, a cat adopting a cat, a spy dog in Washington D.C.'s International Spy Museum, bees working on Labor Day, pets receiving gifts, and pets being gifts.

In some of the poems, people do have viewpoints and names. Many interactions between animals and people also happen. For example, in the poem "Gifts of Pets on a Birthday," a dog and a cat are presented as gifts to twin children. The parents show their children how to integrate the pets with each other and with their new environment.

▼▲
I'm the author/artist and I want to review Amazing Holiday Paws.
Back