Amazing Grace in the Life of William Wilberforce
By: John Piper 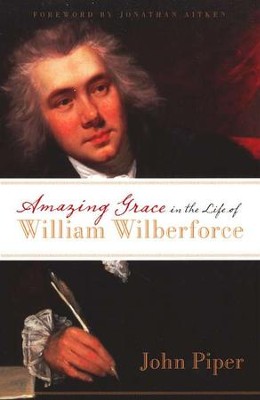 Amazing Grace in the Life of William Wilberforce

▼▲
Many know of the role William Wilberforce played in ending slavery in Great Britain, but what is lesser known is the faith and driving force behind his pursuit of justice. It's a look into the spirit of a single man who was able to impact a nation and history forever. Be spurred on as you examine the faith of William Wilberforce that serves as a solid, inspiring role model and encouragement for believers today.

John Piper is founder and lead teacher of desiringGod.org and chancellor of Bethlehem College & Seminary. He served for thirty-three years as the senior pastor of Bethlehem Baptist Church in Minneapolis, Minnesota, and is the author of more than fifty books, including Desiring God; Don’t Waste Your Life; and Reading the Bible Supernaturally.

Jonathan Aitken is a well-known British author and former politician. He was a Member of Parliament for twenty-three years, serving in the Cabinet as Chief Secretary to the Treasury and also as Minister of State for Defense. His political career ended when he pleaded guilty to charges of perjury as a result of having told a lie on oath in a civil libel lawsuit. During an eighteen-month prison stay, he converted to Christ. He is president of Christian Solidarity Worldwide, a director of Prison Fellowship International, and executive director of The Trinity Forum in Europe. He is the author of twelve books, including the award-winning Nixon: A Life and Charles W. Colson: A Life Redeemed.

▼▲
I'm the author/artist and I want to review Amazing Grace in the Life of William Wilberforce.
Back
×
Back
×