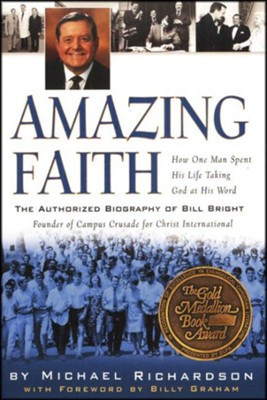 ▼▲
An unforgettable chronicle of courage, determination, and humility, this book is the exclusive account of how Dr. Bill Bright, founder and president of Campus Crusade for Christ International, stepped out in simple, unwavering obedience to God--and the astounding worldwide impact that came as a result.

▼▲
The Amazing Story of One Faithful Man...One Extraordinary Vision... One Unstoppable Movement.
An unforgettable chronicle of courage, determination, faith, and humility, Amazing Faith is the exclusive and inspiring account of how Dr. Bill Bright, founder and president of Campus Crusade for Christ International, stepped out in simple, unwavering obedience to God. Readers will delight in the extraordinary story of how an obedient Oklahoman left the ranch at God's urging, and how that obedience opened the door to reaching literally millions of lives with the message of Christ's love and the coming Kingdom.
From Bright's formative years in the Midwest to the lonely struggles and all-too-human foibles of his early ministry...the founding of the unparalleled Campus Crusade movement to the explosive global outreaches of the new millennium...this authorized, behind-the-scenes biography leaves no stone unturned in its examination of a humble life remarkably used by God-a life which, by God's power, has made an impact on three billion souls.
Written by a retired investigative reporter who has closely followed the life and ministry of Dr. Bright for more than a decade, and with a foreword by Dr. Billy Graham, Amazing Faith uncovers the calling, the passion, the strategic thinking, the sacrifice, and the astounding impact of one man committed to bold evangelism, disciple-ship, and the fulfillment of the Great Commission in his lifetime.

"He's just the kind of man I had in mind when I started the program twenty-five years ago because he's an example to everybody of all religions that it's possible to have progress in religion." -Sir John Templeton, founder of the Templeton Prize for Progress in Religion, which Dr. Bill Bright was awarded in 1996. He donated the $1 million honorarium to support a national movement of prayer and fasting.

▼▲
Michael Richardson is a retired investigative reporter, news editor, and editor of editorials in St. Petersburg, Florida. He is the author of After Amin, the Bloody Pearl, a human rights documentary, and editor of Ethics Applied, a college textbook in its sixth printing. He and his wife, Margaret, were married in 1965 and are the parents of three married children and grandparents of five. They reside in Largo, Florida.

▼▲
High Acclaim for the Man behind Amazing Faith:
The Authorized Biography of Bill Bright

"No movement of our time is likely to have a more healthy impact upon the life of our nation than the movement founded and headed by Bill Bright."
Religion Editor, The Los Angeles Times


"He has reached people in a depth and number matched by few in history--He brings great power to his message because he 'walks his talk.' "
George H. Gallup, Jr., The Gallup International Institute


"There is no one else I know in this world who has lived the Spirit-filled life so consistently while maintaining a high level of humility."
Tom Landry, former coach of the Dallas Cowboys


"Bill has always resisted the temptation to use the influence he has gained through his ministry for political or pecuniary gain. His first concern has always been his burden for
lost souls."
Ralph Reed, former executive director, The Christian Coalition


"He has never sought to receive praise for himself. He is one of the most humble men we know--his heart and motives have always been to lift up Christ, and God has used him mightily."
Charles M. Duke, Jr., Apollo 16 Astronaut,
Retired Brigadier General,
United States Air Force

▼▲
I'm the author/artist and I want to review Amazing Faith: The Authorized Biography of Bill Bright.
Back
Back