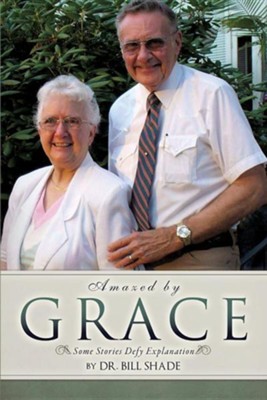 ▼▲
"Amazed by Grace" is the story of a modern day George Mueller. For almost six decades of ministry, Bill and Ruby Shade repeatedly stepped forward without resources to see God provide in ways that amaze. Like Mueller who provided for thousands of children, the Shades have impacted many thousands of people all over the world. This is a must read autobiography for those who want to catch a vision of walking by faith. Paul Seger Biblical Ministries Worldwide Having known Bill Shade for 40 years, I can attest to the fact that he stands as a rare example of a man of faith who speaks with a clear voice. His life's work for Christ as chronicled in Amazed by Grace is anchored by deep battle-tested convictions. Peter W. Teague, EdD President Lancaster Bible College I have known Bill for over 40 years and he is one of the most passionate and knowledgeable men I know. He and his wife Ruby are the example of God's choicest servants who team together to serve our Lord. Thank you my dear friends for leaving your legacy, "Amazed by Grace." You both are very special people Dino J. Pedrone, D.Min. President, Davis College

▼▲
I'm the author/artist and I want to review Amazed by Grace.
Back