Skip to main content
SPRING CYBER EVENT STARTS NOW: And it's a really BIG deal! Up to 88% off through 5/24>
Am I Missing Something? - eBook
By: Ruth Roberts
Stock No: WW40651EB 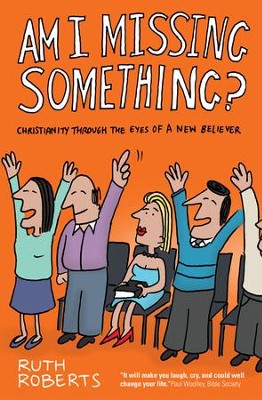 Am I Missing Something? - eBook

▼▲
One time News of the World journalist tries to explain her new belief in Christianity to her friends at the same time as working out those beliefs for herself.
It's a weird and puzzling world we enter when we become Christians. Ruth Roberts, a journalist and media worker who at one time was on the staff of The News of the World, found church completely alien. She shares with us her own experiences in the form of 'diary excerpts' and letters to her father. Entertaining, insightful and poignant, Am I Missing Something? is very honest in revealing the culture clash between Christianity and the secular life. Ruth explores the nature of her new-found belief, and her struggles to reconcile many of her own ideas with that of the church, including the issue of homosexuality.
Am I Missing Something? is based on a column which appeared in Christianity magazine, with additional material.
'This book should carry a health warning. It will make you laugh, cry, and could possibly change your life. Ruth Roberts gives an enjoyable and refreshingly honest account of life as a new Christian in a lively evangelical church. Am I Missing Something? isn't down on church. Instead we're encouraged to model the love, healing, acceptance, grace and holiness to which we are called.' Paul Woolley - Executive Director, Bible Society

▼▲
RUTH ROBERTS trained as a newspaper reporter in her early twenties and worked for five years at the News of the World. Her 'Ruth Roberts' column ran in Christianity magazine for 3 years and she continues to contribute to it. She is married with 3 children.

▼▲
I'm the author/artist and I want to review Am I Missing Something? - eBook.
Back
Back