Skip to main content
SPRING CYBER EVENT STARTS NOW: And it's a really BIG deal! Up to 88% off through 5/24>
I Am...: A Journal for Extraordinary Kids
By: Brad Meltzer
Illustrated By: Chris Eliopoulos
Stock No: WW577003 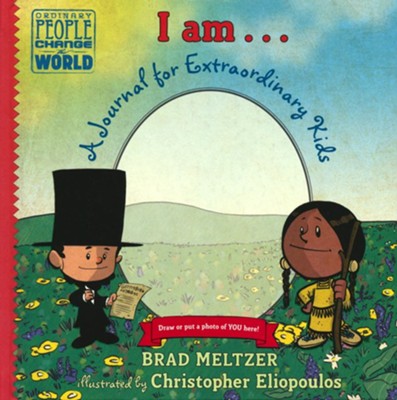 I Am...: A Journal for Extraordinary Kids

▼▲
Based on the bestselling series, Ordinary People Change the World, I am...: A Journal for Extraordinary Kids is a friendly prompted journal encouraging children to discover their own extraordinary qualities.

Are you brave like Amelia Earhart? Compassionate like Abraham Lincoln? Curious like Albert Einstein? Encourage kids to explore their own heroic traits with this lightly-prompted and heavily-illustrated journal from the dynamic duo behind Ordinary People Change the World, Brad Meltzer and Chris Eliopoulos. The iconic imagery throughout will prompt kids to think about the heroes they've read about, and how being ordinary can often lead to extraordinary things.

▼▲
BRAD MELTZER is a #1 New York Times bestselling author of adult thrillers (including The Inner Circle and its recent sequel, The Fifth Assassin). His two nonfiction gift books, Heroes for My Son and Heroes for My Daughter were New York Times bestsellers as well, and he has won the prestigious Eisner Award for his comic book work, Justice League of America. Brad is also the host of the History Channel TV show Brad Meltzer's Decoded.

▼▲
I'm the author/artist and I want to review I Am...: A Journal for Extraordinary Kids.
Back
Back