Skip to main content
SPRING CYBER EVENT STARTS NOW: And it's a really BIG deal! Up to 88% off through 5/24>
Alzheimer's: So That's What It's Going to Be Jim Bergstrom
By: Catherine Bergstrom
Stock No: WW972575 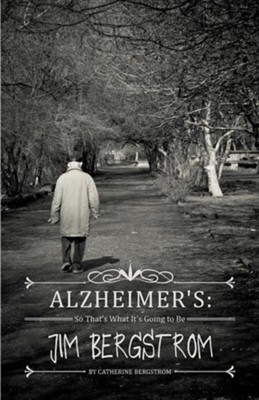 Alzheimer's: So That's What It's Going to Be Jim Bergstrom

▼▲
Chances are everyone knows someone who has Alzheimer's: a neighbor, grandparent, sibling, uncle. This disease is like a tsunami rolling over our society. We had been married for 46 years when Jim, my husband and retired Navy Captain, was diagnosed with Alzheimer's. An Alzheimer's diagnosis is something no one wishes to hear, but Jim accepted it with equanimity and so began this new chapter in our lives. We entered a world different from what we had known; a world of care givers, day care centers, and assisted living. At the same time, we were sustained by supportive family, an Alzheimer's support group, human angels, and our living faith. As every person is different, our story is unlike anyone else's, but the impact is the same. The disease is relentless and inevitably the downward spiral began for Jim. Remarkably, during the challenging time of Jim's illness, I saw more clearly the character of this fine man; his sense of humor, his faith, his respect for others and the discipline and determination to be who he had been for as long as he could. Catherine Bergstrom lives in Annandale, VA and is a member of Lord of Life Lutheran Church in Fairfax, VA. She has two married daughters and five grandchildren. Catherine has written two previous books: I Know This is What I'm Supposed to Do; a Story of Loss and Comfort and The Great Divide Visited, Claiming God's Grace.

▼▲
I'm the author/artist and I want to review Alzheimer's: So That's What It's Going to Be Jim Bergstrom.
Back