Skip to main content
SPRING CYBER EVENT STARTS NOW: And it's a really BIG deal! Up to 88% off through 5/24>
Alzheimer's, Depression and Dementia
By: D.L. Bennett
Stock No: WW477441 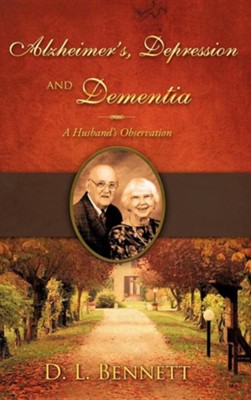 ▼▲
What would you do if your spouse, or anyone close to you, suddenly developed Alzheimers, Depression, and Dementia? Can you imagine how this would change your lifeand the life of the one you love? This book tells how one couple faced this situation. It started as a daily journal with the idea that it would be very private and a short-term journal till his wife came home where they could live a normal life again. She was in a hospital first and then in a nursing home. She was away from home for almost ten months. Her husband took her out from the nursing home as often as possible. Sometimes they were able to spend a few hours at their home. Then she was able to go home where she lived with her husband for a little over two and a half years. This was a total of almost three and a half years from the beginning of her illness till the date of her death. D L Bennett, who compiled these notes, says he just wrote it like they lived it. He was born on a farm near Rector, Arkansas in 1926. He graduated from Rector high school in 1944. After a short time in the U S Navy he attended Arkansas State College and graduated from the University of Arkansas. He was called back to the Navy during the Korean war. He practiced as a public accountant and tax preparer in Indiana where he met and married Helen Warner in 1962. After Helen took early retirement from the Eli Lilly Company they also worked together in the distribution of Christian books with Successful Living Books. They moved to Hot Springs Village, Arkansas in 1985 where they continued the same work.

▼▲
I'm the author/artist and I want to review Alzheimer's, Depression and Dementia.
Back