Skip to main content
The Man You Always Wanted Is the One You Already Have - eBook
By: Paula Friedrichsen
Stock No: WW12126EB 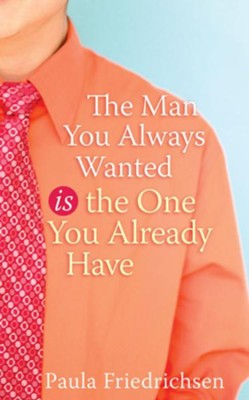 ▼▲
Transform your marriage with the realization that the man you always wanted is the one you already have. Striking biblical insights, combined with Paula Friedrichsen's candid revelations about the inappropriate relationship that nearly destroyed her marriage, will help you see that no man compares to the one you have.

Check Out Your Hubby

He’s predictable, proverbial, and prone to leaving his dirty clothes in a pile beside the laundry basket. He’s the big lug lying next to you every night–and believe it or not, he is your Prince Charming!

But what happens when a man other than your husband begins looking and sounding more appealing?

- embrace the differences between you and your spouse,

- revel in the freedom of forgiveness, and

- draw near to the only Source of lasting fulfillment.


Story Behind the Book

“Twelve years ago, I became romantically, though thankfully not sexually, involved with my then-pastor. This resulted in the church’s devastation and a great deal of harm to both of our marriages. But God used the difficult lessons I learned during that arduous time to reshape my thinking about marriage and to plainly show me that the man I always wanted was the one I already had. By using my own story of failure and forgiveness as a backdrop, this book illustrates how our heart’s desire is often found no further then the big lug lying next to us in bed each night!” –Paula Friedrichsen

▼▲
Paula Friedrichsen is an experienced freelance writer and enjoys speaking at women’s retreats, conferences, and church meetings across the country. Paula’s messages can be heard and seen weekly on Christian radio and television stations in Nigeria, West Africa. She and her husband of more than twenty years, Jeff, have two children and live in Bishop, California. The Friedrichsen family is actively involved in a non-denominational church in their area.

▼▲
I'm the author/artist and I want to review The Man You Always Wanted Is the One You Already Have - eBook.
Back
Back